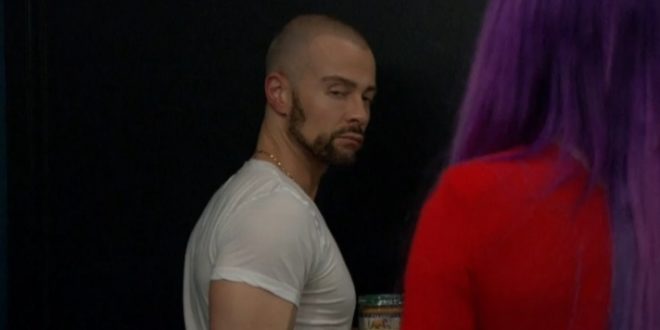 And another one bites the dust!

As I look at the numbers and see that there are still 4 guys in the house after 3 have been evicted makes me confirm even more that the Mooch was a last minute addition just for publicity. Last season had 6 girls to 5 guys while this season should have had 6 guys to 5 girls until the Mooch was a late addition. They’ve always tried to balance it and if Mooch was a real cast member, there is no doubt there would have been 6/6 not 5/7.

Anyway, Ryan is out through a traditional back door where he couldn’t even play in the veto. Good move by Kato to get someone strong out and build trust with Dina at the same time. I’m not sure the damage is fully healed, but tonight went a long way in securing my prediction of Dina joining Tom and Kato once Lolo and Natalie go with Ricky.

I have no clue when the HoH comp will be but I’m sure they’ll mention it. It likely won’t be aired on the feeds but should be back before After Dark (assuming it is tonight, which it should be)

After a very, very long competition, the feeds eventually came up an hour after I went to bed. The winner?

I haven’t watched any of the overnight to see who he may be targeting yet, but I wanted to just update this before I began my overnight post (if there is much to even talk about)