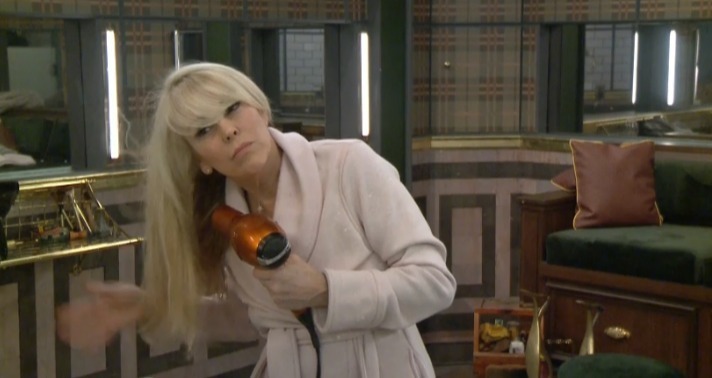 There wasn’t a ton going on last night so I figured I’d take the time to just go over the last few days in the house.

This week has been the longest week anyone has had power since opening week, and the longest we’ll go without an eviction from here on out (I think). Even under the rushed scenario, that means an eviction Mondy and then the double on Friday. However, under that scenario, it means the crew will be busting their ass most of tomorrow to get a full week in before Monday’s episode and the Super Bowl may slow it down.  If they do keep the schedule I guessed, they’ll probably have another pov competition and eviction live on Monday’s episode. The veto competition will likely be another small and easy comp that takes no more than 10 minutes to play.

I think that’s pretty much what will happen because if they don’t have an eviction on Monday, that means they won’t have much to air on Monday or Thursday’s show. Next Friday’s episode is a 2-hour one, so it is likely a double eviction, so it’s just unlikely they’ll have an eviction on Thursday and then two on Friday. Not enough time. My guessed schedule stands:

Alright, this week is a week that Tom and Kato would like to take back. What started off great for the duo ended in disaster and them isolating themselves from the rest of the house after a mid-morning blowup against their former alliance. Tom wanted to make the move of getting out a future threat without the support of his alliance, and that was because the future threat (Ricky) was part of his alliance. As much as I was rooting for Tom, it’s hard to deny that this entire blowup was a result of his paranoia of Ricky.

I will say that he kind of had the right idea that Ricky was probably more of a threat than Joey at the time. He knew that Joey was floating along while Ricky was tight with Lolo and Natalie. Getting Ricky out may have weakened their numbers, but Joey would have still been on an island and easier to pick off. Tom simply failed at convincing Nat and Lolo of that and his mistake was trying to go ahead with the plan anyway. Another mistake was nominating Joey rather than having a planned backdoor which would have allowed him to nominate Ricky, but it’s unlikely that would have made a difference. Ricky likely would have survived the vote no matter what Tom did.

That leads us to tonight where Kandi or Joey will be voted out and we still don’t really have a solid idea who it will be. Joey needs 4 votes to stay while Kandi only needs 3 because Tom will break the tie in her favor. Joey almost certainly already has 3 votes in Lolo, Natalie, and Ricky, so both he and Kandi have been working the two swing votes pretty (Dina and Tamar) pretty hard. Tamar has been flipping wildly between her roommates (Lolo, Rick, Nat) and her ‘frenemy’ (Kandi). She has promised her vote to both Joey and Kandi so she’s guaranteed a bitter jury member no matter which side she goes to now.  Meanwhile, Dina has been doing Dina and just kind of being there. She has been close with Kato and Tom and then close with the other side of the house. She flips by the hour so she may just vote with whatever side speaks to her last.

My prediction is that Tamar will side with Joey as she formed a final 2 with him last night and that will give him the votes to stay. I think Dina will also take the path of least resistance and side with the majority.

The final vote should be 5-1 to evict Kandi. The next target will either be Tom/Kato or Lolo/Ricky/Natalie which means Dina/Tamar/Joey slip into the final 7 fairly easily.  The war between the two sides will continue for another eviction and those 3 will slip into the final 6 unless they’re collateral damage in the war (example: Tom is next and then Kato is nominated after that. If he wins PoV, a floater is gone)

After that, the war should come to an end and we’ll have to re-evaluate when we see who actually survives the war.  I predict Tom or Kato will be evicted and a floater will go.

What do you guys think heading into tonight and next week?

Also, programming note – I am likely starting a new job on Monday. It should be flexible hours but I am going to take next week to prepare for summer and find ways to juggle both blogging and full-time work (even if it means blogging while working!)