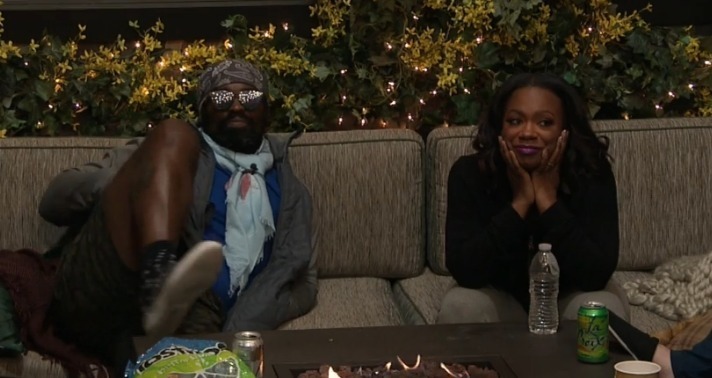 We’ve already had 3 episodes of Celebrity Big Brother on CBS this week and people are probably more confused than when the week started. There have been so many different alliances, twists, flips, and random moments that It’s honestly been hard to track even as someone who watches the feeds all day.  Fear not, I am going to do my best to clear things up from this week…

This is an area where it’s a complete mess. There are so many different alliances going on that I’m not even going to focus on most. Every season there are big alliances, but inside the big alliances, tighter bonds form and those are the key.  For example, last year in the big alliance, Brett and Winston were obviously tight. Rachel and Angela were very tight until she flipped to Kaycee then Tyler (Kaycee remained in the 3 person sub-alliance, but the bond was Tyler and Angela).

Here is what we have this season:

Joey is obviously sided with Ryan and Jonathan right now. Kandi is closer with Ricky who is close to Lolo and Natalie. Tamar is kind of on her own and spends most of the day hating Kandi.  Tom, Kato, Lolo, and Natalie have a loose 4-person thing going.  But in the end, if you want to know how people really stand, what the pairings I mentioned above

The twists are something we’re all still trying to wrap our heads around but will definitely be fully clued in tonight during the live eviction.  On CBS, last we saw was Ricky having the Power of Veto and Mooch still in the house. When the feeds went live, Tom was talking to Kato about his Power of Veto and Mooch was gone. People assumed he quit, but given the talk in the house, he was never really a cast member. My personal guess is they asked him to come for the ratings and he said he could only do a few days because he wasn’t missing the World Economic Forum in Davos. They wrote him in as a twist which I’m sure will mention his brief stint in the White House.

With the twist, because he was never a ‘real’ houseguest, Ryan was forced to nominate someone to replace him. That person was Kandi. Additionally, Kato somehow ended up with the PoV as part of the twist and saved Tom which put Joey on the block.

It’s been a wild week.

There has been a lot of drama with Tamar and Kandi this week, but it’s really only been one-sided. Tamar has spend the week bitching about Kandi whenever she could, but Kandi really seems to want nothing to do with Tamar. It’s like production told them to fight and Tamar is taking her role seriously while Kandi just doesn’t give a shit.

Last night in the house, there was a very awkward situation between Ricky and Tom that I wanted to get into. Sitting outside, they were talking about careers and things of that nature when Ricky started to act fairly condescending to Tom about his standup career. He basically told Tom to just do his routine right there which Tom actually tried but didn’t feel comfortable because it’s apparently a very political routine and he doesn’t want to go that route inside the house. Ricky grilled him more on it telling him he’s a comedian, he should have immunity from any of that and he should also be able to do his job anywhere. When Tom tried to explain a room full of energy while performing is a bit different than a campfire, Ricky still didn’t get it. Tom told him to go play a football game right there in the backyard with no other players but Ricky still didn’t get it.

It was really a weird scene that Tom was feeling very uncomfortable over until it finally died down and the topic changed. I do think that incident will likely change the tide of the show moving forward because Tom originally wanted to have a 5-person thing with Lolo, Kato, Nat, and Ricky but I can’t imagine that working out in the long run.

Tom did float around a plan to try to get his alliance to vote out Joey tonight and steal Jonathan (which imo, is a bad idea), but his alliance really didn’t seem to want any part of that. It seems Jonathan will be leaving tonight and hopefully moving forward we’ll be all caught up on twists and will know exactly what’s going on in this house!

Not sure if I’ll be live blogging today because it’s eviction day and I expect a typical eviction schedule, but I’ll be here for the live eviction tonight at 8pm est!