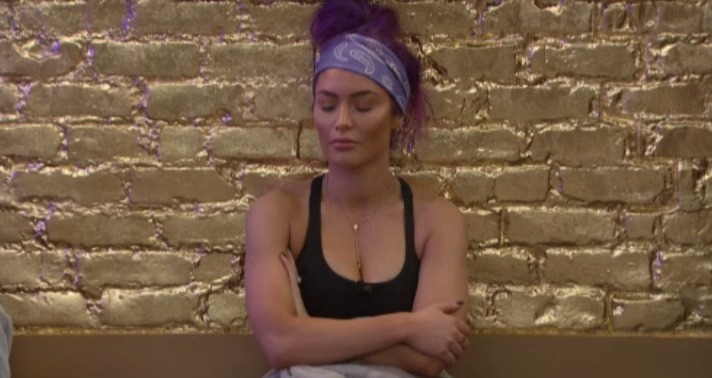 It was a long day for me yesterday, so when Julie said that Monday will be busy with the HoH, PoV, and eviction, for some reason I instantly took it as they were going to have the HoH that day. I was too tired for it to click that they’ll show the pre-recorded HoH and have a live PoV and eviction. So, I watched some Ted Budy tapes then fell asleep. Oops.

Apparently, there was an HoH which made complete sense. With a normal brain, obviously, they wouldn’t go two days without an HoH. Re-watching the feeds, I didn’t miss a whole lot. The plan is going as expected as someone other than Kato won HoH and that was…

On the feeds, the group spent most of the time hanging out or bashing Tom and Kato. I guess that’s the theme for the next two days as the group of 6 will bitch about the pair bullying them. Really. One thing that can be said about the remaining group is that there aren’t many situations they won’t exaggerate about for dramatic purposes (Note – I say ‘remaining group’, but Dina and Kandi are basically excluded. They are acting like adults about it all).

If you listened to the Bedroom Bunch re-tell the season (my nickname for Lolo, Natalie, Ricky, and Tamar), you would think Tom went around making physical and mental threats to everyone and Kato was an abusive racist who flipped out on anyone who got in his way. The reality is, Ricky and Natalie are instigators and Tamar/Lolo both ‘run hot’ (as Joey put it) and completely blow up any situation.  Needless to say, it’s getting pretty easy to root for Kandi or even Dina moving forward.  I’d say Kandi first because she has been the target of a bit but handled it all with class. We haven’t really seen Dina deal with anything.

Oh, and speaking of Joey, we needed ‘interview Joey’ this season. Where the hell was he? Last night, he was honest and funny and didn’t hold back when describing the house to Julie. If that Joey played the game, I would have been rooting for him since day 1 – even with his unwillingness to say WOAH.  Oh well.

Today is Super Bowl Sunday and if anyone doesn’t know, I’m a Pats fan, so I won’t be around tonight to blog. And before you say it, I’ve been a fan since the late 80’s, early 90’s when I was old enough know what football was. No bandwagon here!  Also, I did training for that job and it’s a professional driver for corporate clients. They allow smoking in the car – WTF?? Look, I don’t care if you smoke but no way I can work at a place that will make me sit in a car with someone smoking. Just can’t do it. Looks like the job hunt is back on. As a result, my Big Brother schedule shouldn’t be interrupted much.