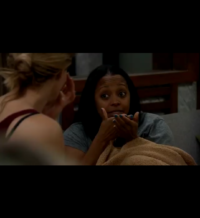 After all the debating today, Keshia left on a unanimous vote and it had nothing to do with strategy. I’ll give you my thoughts on the show and backtrack a little at the bottom with some feed updates from today. I liked Julie’s blouse even if it was a little too sheer and she looks fantastic in that color blue but the shoes, I hated. I’ve seen her wear that exact shoe in multiple colors so maybe they’re really comfortable but they’re hideous and matching the color to her shirt made them worse. The coughing shade was great! 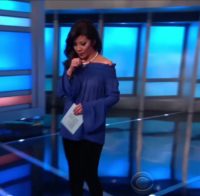 Didn’t the set for the veto comp seem to take up a lot of space compared to the simplicity of the comp? We had Marissa versus Omorosa 2.0 with Marissa winning again. If Keshia was trying to help Omorosa, she shouldn’t have chosen her to go against someone that early in the comp. She didn’t get knocked out that round but she could have.

I thought the back door plan for Shannon was actually going to happen when I saw Shannon go in the house and the other group stay outside to talk. I still thought it even after Keshia started crying because at first, she was saying they better not lie to her. (I think this was in reference to her conversations today when she told Brandi she would stay and help them get rid of Shannon if they promised to send her home on Friday)  Did you guys notice how fast Brandi looked over at Ross when he said they may not win the HOH and be able to do what Keshia wanted? You just know she was giving him a STFU look.  We knew it wasn’t going to happen when Marissa started telling Keshia that she would do what Keshia wanted.

Was this the first time “breast milk” was said in an eviction speech? It has to be. I wasn’t even thinking about Keisha at this point, I started wondering if Metta was jealous. I doubt Keshia did any damage to Shannon in her speech but at least she said something game related. Omarosa’s speech was…..blah, blah, blah, blah. You didn’t really think I was going to quote all that crap did you? I also kept trying to determine if Brandi’s expression was emotional or pissed off when they were on the couch during the vote. It’s one thing for Ross to turn her idea down but  she’s worked really hard the past couple of days to have her plan fail because of low milk production and a broken breast pump. So Keshia left, wearing very pretty shoes by the way, and is off to feed her baby.  I found her fairly boring on the feeds anyway so I don’t really care. When you watch the intro, Keshia is the only person who doesn’t move and maybe that was a sign so moving on….

Conversations from this afternoon:

As I mentioned before, Brandi promised to send Keshia home Friday if she would stay snd vote out Shannon.  They had Marks vote and didn’t really need Keshia’s but I think Ross is the only one of them who trusts Mark so maybe they thought they had to have her on board. The feeds were off a lot today and I think Keshia may have spent a big part of it saying she wanted to leave tonight. I couldn’t understand why Brandi was spending so much time trying to get Omorosa evicted if they had a back door plan but I get it now. They must have realized they were going to have a hard time getting Keshia to stay.

During group talks, the more Shannon and James pushed for Keshia to be evicted, the more Brandi pushed back for Omorosa. Brandi was being Brandi and at one point said to James “clearly I don’t like you.” She also accused one of them of having something going with Omarosa. Shannon made the argument that Keshia went behind their backs and talked to Chuck so Brandi pointed out that Shannon went behind their backs and talked to Omarosa. Later, I heard Marissa telling Shannon the fact she and James were pushing so hard to keep Omarosa made it look more suspicious. When the feeds came up again, I heard someone saying they were glad they were able to come to an agreement to let Keshia go. After that, they were still talking about the back door plan. I went into tonight with no clue who was leaving.

James and Mark talked and James said Brandi needed to leave next. He mentioned that Brandi was a bully. He said all the women manifest drama. He said they were all mean to each other and mean to him.

Ross got VERY excited to get a vacuum cleaner today and was showing it off. Omarosa needed to take precautions for the vacuuming with a face mask. I wonder if she could have simply gone to the hoh room while they cleaned but nah, not dramatic enough. 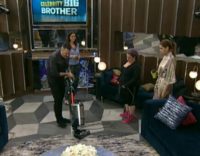 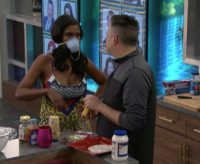 So what’s the over/under on how many hours it takes for Shannon to find out she almost got backdoored?