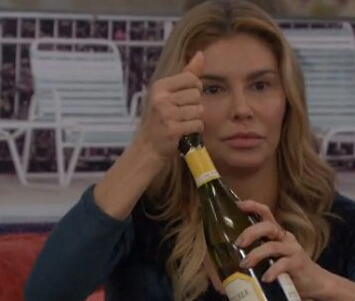 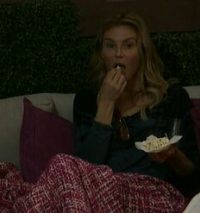 Nominations weren’t a surprise, Ross nominated Omarosa and Keshia. He met with Keshia in the hoh prior to noms and told her he didn’t want her to go home. They cleared things up from the past few days regarding who knew what and who did what. It’s covered in the past couple threads if you missed it. Mark and James see Keshia as the bigger threat but most everyone else doesn’t. Not everyone sees Omarosa as a threat anymore either and Brandi should get most of the credit/blame for that. Brandi and Ari are determined to work with Keshia instead of Shannon but Brandi takes the lead of putting it into action. I’m not sure how much game Ari and Brandi talk because truthfully, since I don’t like Brandi, I ignore her as much as I can. I’m going to need to stop that because these 2 definitely have some game. Ari has been a pleasant surprise who I didn’t think I’d like but I do. 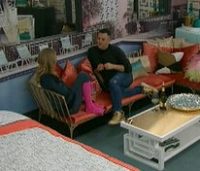 Brandi was already pushing Ross to make a big move but when they met in the hoh, she may have made progress in pushing him to backdoor Shannon if they have the chance.  He’s felt it was too soon but Brandi told him that he’s definitely a target and James & Shannon will be hard to get out. She tells Ross there’s no way   S & J won’t turn on him and mentions how much they go off to talk in private. (Ross was already worried about S & J having a F2 so it’s a good button to push) Brandi &Ari want to reel in Keshia to work with them since Keshia’s upset with Omarosa and she doesn’t think Omarosa has numbers anymore to do anything. Ross doesn’t want James after him but he ends up telling Brandi about the F4 with Marissa, Shannon and James so that makes me think he’s closer to ditching     S & J.  He already has a F4 with Marissa, Brandi and Ari. Brandi and Ross make a F2 deal in this meeting. He meets with Brandi and Ari later in the day and they discuss it again. HelloRoss is becoming HelloRossGonnaGetBusted.

After noms, Ross met with Omarosa and it went better than he expected. She was very gracious and said she understood. (She was one step away from hugging Ross and telling him she was proud of him) She said her time away was a gift because she was able to step back, gain perspective and remember that it’s just a game. She said she got to meet 11 great people.  Ross told her how worried everyone was over her health. She said the time in the house has been great because it allowed her to take a break from real life and have fun with people for a couple of weeks so she was greatful. She said she was glad it wasn’t a back door plan and he said he appreciated her honestly about wanting the 6 women to stick together.  She insinuated that Shannon put it all on Ross and said he was the mastermind. He denied this and she told him that if he’s in the F2, he needed to own it and the decision behind Chuck leaving could be the reason he wins. She said she’s glad she didn’t know in advance, didn’t lie to Chuck and he’ll see the footage and know it. (Is she reminding him she could voting so he shouldn’t lie to her? Either way, she’s good) I’d say she’s sincere about her time away. It’s always going to help if you can step back and decompress. It’s an advantage in my opinion, especially when it’s someone with a big mouth and strong personality. I won’t complain about it though because I’m rooting for someone who keeps trying to have the BB version of a prison break. I lost the right to say anything about it. 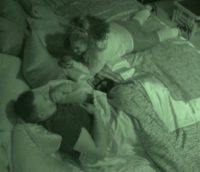 Ross and Marissa have already talked about it before but they give the “Shannon situation” some real consideration. They think it’s a good move to get Shannon out but worry James will target him and think it’s an unnecessary move because Ross knows Shannon and James are targets anyway. They arn’t worried about Omarosa and Keshia in comps. I should point out that Marissa is the most irritated by Omarosa’s trip to the hospital. She just wont let it go and made comments about skipping her own medications so she could have a vacation to the hospital. She also made a snide remark about being able to beat Omarosa in comps because she said all it took was spinning around a couple of times to have an asthma attack. They also know Keshia’s using a breast pump around the clock and they may know how tired that can make her. Neither think Omarosa or Brandi can win in the end and I think they like the alliance with Brandi and Ari the most. They trust them more than they do Shannon. (Marissa seems sincere but don’t forget, she and Shannon are real life friends. Marissa’s pissed that Shannon lied to her about Keshia)  I do wish Ross would stop deciding who can win with such certainty because he may be in for a surprise. I think any of them could win depending on what they do the rest of the game. I also didn’t have Marissa pegged as “the bitchy girl” but I like it! She needs some lessons from Omarosa to take it to the next level because I could never see Omarosa saying “like” every 4th word the way Marissa does.

There was some funny talk about whether or not Metta could be America’s player which Marissa said would explain some of his behavior. She thinks we may be telling him to sleep with Orwell the owl every night, announce who he’d put on the block and other things that seem a bit crazy. Metta said he didn’t want to leave anymore and wants to compete but that may change by the time this is posted. Here’s a shot of Metta doing some serious plotting: 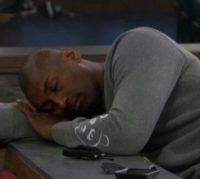 The house may have gotten nervous last night but the feed watchers got excited when this happened:

The hg’s went to bed fairly early by BB standards and I don’t think Brandi has to fake a memory loss today. They’re all convinced the veto comp is this morning so they wanted some rest. (Julie said it would be played live on Monday) 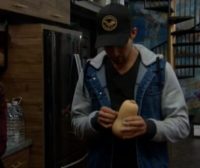 Tonight, we should see the hoh comp, Omarosa getting sick and noms. Ross said he liked the back and forth with Omarosa during the ceremony so I’m curious about that. I also want to know if Shannon and Omarosa did any smack talking during the comp since someone mentioned it. I mostly want to see what Marissa nailed Omarosa with and I heard Metta hit a cameraman too but we won’t get too see that.

My new feeds game is seeing what I spot more often: