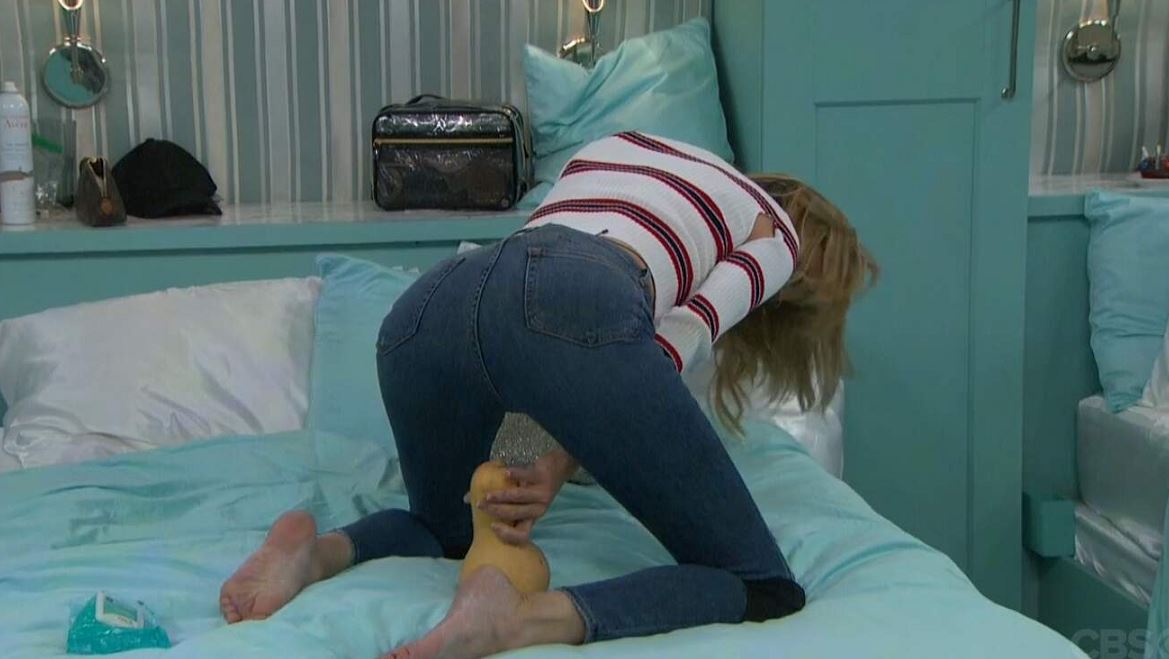 Hi everyone, I’ve missed you guys! I can’t beleive CBS wouldn’t coordinate show dates around Steve’s vacation but they didn’t so I’m going to fill in for him a little and post a few updates. Let’s catch up on last night’s show, first impressions and the live feeds last night.

The first show was good and the feeds were better. I had low expectations from the start and didn’t care that they were barely celebs. I’m looking at it as a regular mini season with regular people, almost.  By doing that, I’m not upset that they couldn’t landany big names, we knew that would never happen. I think it’s going to be entertaining because even if they arn’t big names, some have very big egos.

I have to get this out of the way. Some of you already know, I’m obsessed with Julie Chens’ clothing choices. I wasn’t feeling the red dress last night. I saw a pic on twitter from the back and it was backless which was pretty but since we didn’t see that on the show, I was getting an Amish hooker vibe if there even is such a person.  Omarosas’ dress was fantastic…for the Oscars, not BB. I noticed they didn’t have to carry duffle bags into the house since they’re sort of celebs. The other changes were the addition of a bar, beds for everyone, a tiny yard and a real wall for the showers. I liked the “star” hoh comp theme and am guessing it will continue. I didn’t care for the gold bags that could change the hoh by luck. Why did they even play the comp? Shannon and James showed they’re competitors, Brandi is already rude and we already have our first conspiracy floating around so it was a good first night. (People are saying that it was fixed to save Omarosa, I’m not saying that but it’s making the rounds) I was glad they made them do a real comp instead of coddling them. We’ll have to see if it continues but I’m optimistic.

This may be a strange pic to start off with but it may be the first glimpse into the start of a train wreck so I thought it was appropriate even if it’s…inappropriate.  The hg’s received plenty of alcohol and the feeds started off with a bang. Brandi got drunk, tried to hump a butternut squash and irritated half the house. We could tell she didn’t like James from the show but it seems she has a problem with the way Mark does dishes too. She used Marissas’ nose to demonstrate Jumanji while playing charades which wasn’t a hit with some people. Hg’s mentioned how they’d had a very normal first week but as soon as the feeds came on, Brandi turned up the volume. She also told most of the house during a casual chat in the back yard that she heard the guys were going after her so she had to go after them.  She said  “ya’ll put me up so that’s why I put you up.” She said they were threatened because she knows so much about the game. (since she isn’t HOH and didn’t put anyone up, I might have to disagree) When Mark tried to tell her that it wasn’t true, she told him that she didn’t invite him into the conversation, even though everyone had been participating.  Did I mention she told them that Shannon was the source of the info? Shannon was naturally unhappy about this and asked Brandi not to tell on her. Brandi told Shannon that she shouldn’t worry about it because they already hate Shannon anyway. Shannon said it would be a problem if the guys win the next hoh but Brandi said that wouldn’t happen so it didnt matter. Once Brandi was gone from the group Keshia let them know, it was only because she was drinking and said that Brandi had been calling her Rudy Huxtable. (Good try at least Rudy) The ladies in her all girls alliance spent the rest of the night trying to get her to go to bed and keep her there. 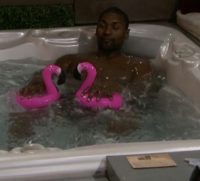 Metta is having a hard time in the house. It’s been rumored from the source (that was accurate last year about several things) that he has already attempted to leave twice earlier in the week and yesterday, he used the emergency button and tried again. I don’t know if it’s true and didn’t hear it said on the feeds but heard a few things that made me believe it.  Brandi was talking to Ari and said that if someone really wanted to go, they could go. Chuck talked to Metta at one point about what they signed and knowing what they were getting into. Metta also said something about how he had been a bad boy and how great the show had been to him. Julie also said during the show, something about having a plan if anyone didn’t make it and that isn’t an announcement she usually makes. I hope he just needed more time to adjust than the others but if he bails, I won’t be shocked. If you’ve followed his career, (I have, admitted huge NBA nut) you won’t be surprised either. He can’t sit still, is very spontaneous, does off the walls things, and once thanked his therapist after a win. I dont know what his specific issues are but he donates tons of money to mental health causes. I think that’s where he donated the money from auctioning off his championship ring too but not certain.  I’m a fan of his so this isn’t shade, I’m only saying that I wouldn’t be surprised. I hope he hangs in there but he’s obviously clueless about the game so his days are probably numbered either way…there goes my secret wish of a Metta & Ross alliance. Ironically, if he knew more about the game and would spend some of his time strategizing, he might be less bored and boredom is what I think is getting to him. (Bonus Metta/Ron trivia- for those who don’t follow the sport, watch the video of Malice at the Palice from 2004) He may be having a hard time in the BB house but this is NO wimpy guy!

A few other things:

James was teaching the hg’s boxing moves. Since Chucks in the house, it was ridiculous to me and James seems like a know it all. Maybe I’m wrong but either way, he annoys me already.

Omaros, Marissa and Keshia have discussed trying to control Brandi and maybe pouring out the alcohol. (She really will go nuts if that happens)

Ross and Omarosa had and quiet talk about the White House so I think she’s going to spill some stuff while she’s there. I’ve wondered if she would save it all for a book. She told Ross that people should be concerned and that “he” won’t listen about staying off Twitter. I don’t know how much of this was to make herself sound important or how much is true. I’m not here to discuss politics but it could lead to better BB house conversations than people’s favorite foods and the stuff we usually hear. Omarosa seems to be making bonds with most of the house so far. Love her or hate her, she’s off to a good start.

Brandi is acting like she doesn’t remember last night. Is she playing dumb or just dumb? You decide.

Keshia had the gold bag with the prize and is now the HOH. James and Chuck were nominated for eviction. Shannon won the POV but didn’t use it. James appears to be the ladies target. Unless there’s something I’m not understanding,  I don’t know why she changed the HOH. Why would you want to be HOH when your group was in charge but you wouldn’t have to take the blame?  Shes not a fan of BB so maybe she just did it for the private room??

Brandi- Most likely to cause feed blackouts because she’ll talk about things she’s not allowed to…. intentionally and/or hit someone

Arianda-Most likely to fly under the radar for a while

Keisha-Most likely to cook and be boring on the feeds

Shannon-Most likely to stop telling Brandi anything of importance

If I do more updates, I’ll try to keep them shorter than this one and a little more structured. This was last minute so it’s a bit scrambled. That’s also why there’s almost no pics posted.