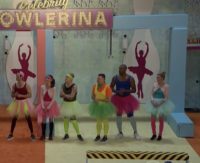 The Sunday episode went mostly as expected and I was 1 for 2 with my information. Shannon and Omarosa did have words during the comp but Marissa didn’t hit Omarosa with anything so I don’t know what the hell she was talking to Ross about in the hoh. I always like the bowling and spinning comp. It’s strange they have to go outside and act shocked to see which comp they’re playing but they’re already wearing the tutus. Do TV only viewers even fall for this? I noticed this cast didn’t fall and crawl all over the place like they usually do so I’m wondering if they make the regular casts amp it up for TV footage. Damn, Metta could spin! (He said he’s taken ballet and it helped him with basketball) This comp should have also shown the hg’s why James still needs to go. Brandi is the one behind making a move on Shannon so the edit was such a lie. It usually is so no big deal but since the hg’s vote for the winner and probably won’t watch anything but the show before they vote, it’d be nice if they gave an accurate edit this time. As for the DR’s: Ross is still the funniest and James still thinks he’s masterminded of Chuck leaving but what was Metta doing in there??

I thought Omarosa was rude (even for her) during the nominations by cutting off Ross. I was glad he told her she could leave if she didn’t want to hear it, then he ruined the effect by having very little to say afterwards but at least he held his ground. I did think it was funny when Omarosa told Marissa “Don’t play me, then come hug me.” I probably won’t say this often but I agree with Omarosa on that one. Marissa telling everyone Omarosa yelled at her was ridiculous too. Omarosa cuts you with a very low, soft voice and NOT yelling is partly why she intimidates people. That’s all I have as far as the episode so I’ll cover a few feed updates below. Here’s some random pics first.

During the day, everyone continued to go back and forth over who should go home.  James, Mark and Shannon want Keshia out and Ross & Marissa want Omarosa out.  Brandi and Ari are  pushing to backdoor Shannon.

Ross stressed over getting houseguest choice for the veto pick ALL day long. Mark, Ari and Metta told him they’d prefer not to play. (Ari has a cut finger and Mark is afraid of getting a punishment. Metta may just be too busy going over diagrams of his next escape attempt and doesn’t have the time to spare) Ross is considering backdooring Shannon but he knows if he doesn’t pick Shannon as houseguest choice, it would look suspicious. He may want to pick her, secretly hoping she’ll win too so he doesnt havE to make that decision.

Omarosa definitely got some information while she was out of the house because yesterday afternoon, she whispered something to Keshia about Malcolm-Jamal Warner’s interview with TMZ where he was defending Keshia regarding her remarks on the show. He gave that interview after the episode when Omarosaa and Keshia had the apples and oranges conversation. Omarosa also told Keshia that she didn’t want the Pillsbury Doughboy to win, referring to Ross. Keshia told her she couldn’t call him that. It isn’t relevant to the updates but I thought I’d point it out since she goes around telling people Shannon is evil.

Shannon and Metta did some yoga and worked out together. She said this was one more thing that would put a bigger target on her back. She spent the day schooling everyone on BB and was the teacher as they studied for possible comps. I think that is putting a bigger target on her than doing a little yoga with Metta. Spelling “responsibilities” when she didn’t need to win the Veto probably didn’t help either. Here’s a shot of Shannon’s supplement drawer. To each his/her own but if I had to take that many supplements, I think I’d just eat some food. 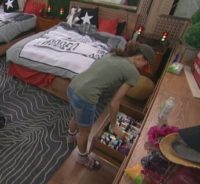 There’s no point in trying to recap all the conversations about eviction plans because they were constantly switching. Instead of blaming myself, I’m blaming Ross and Marissa. These two were lunatics yesterday. Ross is spending too much time thinking out loud. I understand the need to debate what he wants to do but some of that should be done internally before he has so many conversations. He’s worried that evicting Shannon will make him the #1 target and he may be right. I didn’t think getting Shannon out was the best move for his own game but I do now because everyone knows about the plan except Shannon and James. He almost has to do it now because there’s no way Shannon isn’t going to find out. In his defense, Mark is the only person he discussed it with other than Marissa, Brandi and Ari. He hinted at it to Keshia but Marissa had already told her anyway.  Mark will do whatever Ross wants so he had no business telling him about it until he had made the FINAL decision. I feel like he gets an answer from people but goes back an hour later and asks the question again as if they hadn’t already answered. The BB voice needs to come on and say “Ross is this your final answer?” (won’t  happen, different show)  He has Marissa on board, Mark thinks it’s a good idea and it was actually Brandi and Ari’s plan so why does he keep asking them if they think it’s a good plan?

Ross’s mouth makes me nervous but Marissa’s makes me want a Xanax. She talks nonstop, talks about everything and talks over everyone. I’ve seen people get paranoid in the house over the years because they have too much time to think but yesterday may be the first time I witnessed someone actually talk themselves into a frenzy. (well, there’s Vanessa) For starters, without Ross knowing, she’s already told Keisha and Omarosa about the back door plan for Shannon.  She kept going in circles and half the time, her game talk didn’t even make sense.  In one conversation, Ross and Mark couldn’t figure out what she was talking about and she even said “I’m going to stop talking now.”  She didn’t. She wants to work with Keshia instead of Shannon and feels bad that she went against Keshia in the last vote so I can understand she wanted to let Keshia in and work something out on the side with her.   Here’s the part I didn’t understand, the key to Marissa working closely with Keshia is to keep the divide between Omarosa and Keshia going. What does Marissa do? She sits and explains to Keshia that Omarosa didn’t know anything about any of the plans and makes Keshia feel better about trusting Omorosa. After she made the rounds through the house and told every BB secret she could possibly have, she decided there was a bigger plan going on in the house that she wasn’t a part of. She became freaked out over this and talked to Mark and Ross about this epiphany. (This was the conversation I just mentioned) From there, she moved on to thinking she was the one who was going to be back doored and started distrusting Ross.  She told Ross she didn’t think he listened to her opinions and was dismissing her ideas. In Ross’s defense, if he is, it’s probably because she has 1000 opinions per day so who the hell could keep up? 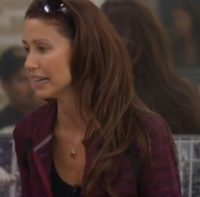 By last night, Ross was leaning towards keeping Shannon but with everyone in the house except Shannon and James knowing, he may be screwed either way. Brandi continued to tell him, he’s a target either way now so he should get out a competitor. Ari slept upstairs with Ross and she told him he needed to be careful with Mark. Ross trusts Mark and he told her how he and Mark have a deal not to put the other one OTB. Ari said she’s sure Mark has that same deal with James. (He does)

if Ross gets houseguest choice, he plans on picking Shannon and if she doesn’t win the veto, he may still put her otb.  The chances are increased a little now that they know about the eviction happening immediately after. I still don’t think he’ll do it because he’s concerned with James targeting him.  If noms stay the same, I have no idea who’s going home. The constant gaming and alliance switching probably makes these recaps confusing to read.  I think this is the best BB we’ve seen played in years. The game and the alliances are constantly in motion so I’m sure most of my recaps are old news by the time they get posted. In my opinion, it’s a good trade off because I’d rather have an active game instead of having to post that “nothing has changed and everyone is still voting with the house.” It’s been a long time since the viewers are the ones who may get blindsided and it’s fantastic!