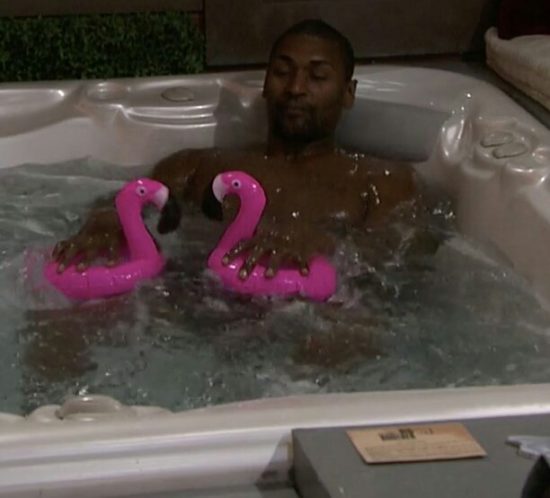 Before I get to the recap, I wanted to pass on something. Ross mentioned going home when they’re evicted instead of a jury house.  I would imagine all of them would know if the were heading to jury or not. Also, someone from CBS said in an interview that the public vote would factor in somewhere. I’m wondering if we’ll vote for the winner.  Maybe you guys have some thoughts about it. Also, the hg’s were given access to Twitter. They each got to send something out but they didn’t have access to see anything. They decided to go in order of who had the most followers and James claimed to have 3 million so he went first. Everyone was asking him to ask his followers to follow them too since he “has so many” and he did in his tweet. These people are cold, use him for his followers just before they evict him! I’m not complaining, I like cold hearted BB and I’m loving the lack of shomance interest from people. (I’m not counting Brandi’s affection for produce)

I don’t have time stamps for my updates other than “daytime” and “overnight” but the feeds were messed up all day and they were wrong anyway. We’ll let that be the reason I’m using instead of my laziness and lack of concern for detail.

Brandi woke up and did the apology tour. She thought she was only mean to Mark but Ross had to explain that, ummm no, she was rude to half the damn house. He told her she had thrown Shannon under the bus which Brandi didn’t care about. She claimed that since the house already hates Shannon, no harm done. (Drunk logic?) Mark was very gracious in accepting her apology but he kept the conversation going too long in Brandi’s mind because afterwards, she told Ross that she wanted to take it back, wasn’t that sorry and didn’t like Marks reaction. (No logic here, drunk or otherwise) She also told everyone that she was sorry but she didn’t remember anything. (This isn’t logic, it’s called lying)

Shannon and Omarosa talked more game. Shannon’s glad she can play for hoh again but if all the guys drop, she doesn’t want to win it.  They both want to keep Brandi for a shield and use Ross to help them have a connection to Mark. Shannon is concerned about Omarosa and Keshia having a F2 and asks her about it. Omarosa says they don’t but that she won’t put her up or vote her out. She said she isn’t going to be the one to kick out Rudy Huxtable. She also mentioned that Keshia has also wanted to leave the house already.

James did some campaigning and he really sucks at it. He told Ross he wants to go to the end with him. He told Mark that he has a great plan but he can’t tell him about it and just to trust him. (Ya, we’ve never heard that on on BB) He threatened Omarosa with ending up on the wrong side of the numbers and thought that would be a good approach. He was also very confused and told Mark that he was 100% confident he’s one of the strongest players in the house and anyone not wanting to work with him is pretty fu****g stupid. I believe I mentioned yesterday that he also knows everything about everything too and he annoys me. (His campaigning was as if he was channeling Josea just a bit. He didn’t call himself the Messiah so he didn’t go full on Josea but it was lingering in the air)

Shannon told Brandi and Ari that they could flip the script if they wanted and get out Chuck. They tell her it’s too soon for that.

Omarosa says she’s a fan of BB but had to have double eviction explained to her. (She may have been faking) Omarosa has been a little annoyed that Shannon won’t own up to being a superfan.

Omarosa thinks the Republicans will get their asses kicked in mid terms and Marissa tells her that is great news. (If the political talk stays on this funny level, we don’t have to worry about the show turning to politics)

Metta talks to the cameras way more than he does to the hg’s. He did voice his concern about Brandi and said he didn’t want her to make a fool of herself on tv. It was very thoughtful and seemed genuine but he doesn’t realize he’s several years too late to have that worry. Train left the station a LONG time ago.

Omarosa and Keshia had private game talk. Omarosa let her know that Shannon is worried about the two of them teaming up. She’s winding Keshia up and aiming her at Shannon. They hope Shannon and Brandi will go after each other. They also decide they may need Chuck because they think Shannon has something with Mark. Omarosa says Shannon has deals with everyone in the house. Omarosa wants to keep Metta as long as possible and Keshia thinks he’ll crack by Monday. They discuss his mental state some more because they think they will need him. (I don’t care about anyones complaints of D list celebs-you can’t make this shit up!) They both agree that Brandi played up her drunkenness and some of it was acting. Omarosa said Brandi jumped on her bed and started humping her. (They still think she’s nuts and don’t think it was ALL acting)

Keshia decides to make a deal with Chuck that if it’s a tie, she won’t evict him if he doesn’t come after her. She also talks to Chuck about Ross playing both sides and how Shannon is playing too hard.

I’m not going to be able to recap this in neat sections in the order things happened. It’s too much too keep up with. There was tons of game talk, the people talking kept swapping out and it went on forever. The game has begun which is great but I’d have to be a court reporter to do this the right way so here’s the gist of what went down last night.

We were already seeing signs of Shannon’s paranoia over Keshia and Omarosa becoming too close and Omarosa fueling the flame of Keisha’s distrust of Shannon. I won’t say Shannon is playing too fast since they have less than 3 weeks in the house but I do think she’s playing too pushy. Her subtle suggestions from earlier in the day about flipping the script on the plan turned into a flashback of Vanessa by late last night. Shannon is convinced Keisha will come after her and that she and Omarosa have made a deal with Chuck (She’s right) so she’s decided she wants to keep James and ditch her alliance with Omarosa and Keisha. Well, she thinks she can ditch Keshia but keep Omarosa. She told Ross they should vote out Chuck and tell Omarosa at the last minute. Ross told her no.

Shannon and James talked and he went through the usual things about wanting to work with her and how loyal he would be. She  let him know she wanted to keep him but said she needed to get Marissa, Brandi, Ari and Ross all on board or it wouldn’t work. (She basically told him her entire alliance) They discuss the final four with the two of them, Ross and someone they would name later and even touched on the possibility of a final two together. James also talked about this F4 with Ross. Shannon is speculating about Keshia having something with Chuck and wants to know what’s going on but doesn’t want James to know his staying hinges on that. She suggested the best thing James could do was talk to Chuck and try to find out if Chuck has something going with Keshia.

Ross talks to Mark to see if he would be on board with a group of 6 but says he wants James and Chuck out.  Mark seems very eager and thanks Ross for including him.

Ross and James have the same talk while running the numbers. Ross has to keep convincing James that he won’t get Omarosa on his side. James thinks he’ll have the entire house except for Keshia. Ross says he will think about it.

Brandi doesn’t like the idea of saving James but she does talk to him about it. She doesn’t see his game the way he sees things and she lets him know. He’s  talking about his game moves she tells him didn’t have any. He tells her that it had been too soon and if they do this it would be “the” move.  She tells him that it isn’t HIS move and if it happens, it’s because they’re saving his ass, not the other way around.  I don’t like Brandi but she happens to be right. She also sees Chuck as a problem for Shannon, not herself.

Marissa was offended that James left her off the list when he was going over the people who would be in the new group. Ross and Marissa had their own talk and discuss their concerns over way it could look because Metta would end up with Omarosa and Keisha in this plan. It isn’t about race but they seem to have concerns that it could look that way. Neither are comfortable with it at all. Ross mentioned this to Shannon and she isn’t concerned and points out that their actual opposition would be Omarosa,  Keisha and Chuck, which is true. Marissa also isn’t ready to go against Keshia yet and points out that they don’t even know if Keisha has turned on them and she’d like to give her the benefit of the doubt. This isn’t what Shannon wants to hear since Keshia is who she wants gone. Brandi and Marissa are the main two who would like to keep their original Alliance of all the ladies plus Ross intact until they get down to 7.  Ross is worried about Omarosa but I don’t think he’s convinced that keeping James automatically helps him get rid of Omarosa.

Omarosa spoke with Ari and Marissa and told them they couldn’t trust Shannon. Shannon told Omarosa that she and Marissa were actual friends. I thought it was a dumb move at the time but maybe not if Omarosa doesn’t remember.

By the end of the night Brandi and Marissa seemed to lean towards evicting James. I think Mark will work with whoever wants him and Metta still wants to go home.   Mark is the only person I’ve heard say he’s voting with the house which is a refreshing change and I don’t actually blame him for using that line since he’s kind of on an island.  At the moment Brandi and Ari are definitely a duo.  Shannon, Ross and Marissa are a pretty tight trio but I like that all of them appear to be playing for themselves. I don’t have a clue who will be evicted or if it’s a double eviction but I’m pretty sure the girl power movement in the house has ended….as usual.