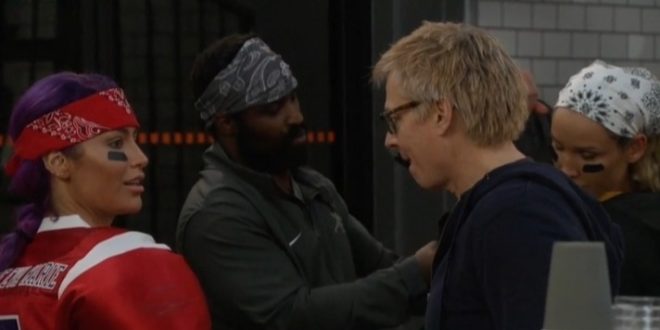 I just realized we’re currently in the longest stretch without an eviction since the opening week, so it’s nice to see things slow a bit for a minute. The slowdown has made this feel more like Big Brother has the strategizing and whispering has been in full effect this week. Tom may have schemed his way out of his alliance which allowed Natalie, Lolo, and Ricky to form a closer final 3.

Natalie pulled off the veto win which is such a Kaycee move to do (I’m going to keep comparing her to Kaycee because I’m already calling her the CBB2 winner now), and that will allow the girls to regain control of the house over Tom. No matter what he had plans to do with the backdoor, it is super unlikely Natalie will use the veto because she knows it will risk Ricky going on the block and that’s just not going to happen. Joey and Kandi should be the final players on the block this week and one will go home Saturday night. Perfect time if they’re an NFL fan.

I don’t really see them keeping Joey even if Tom wanted to. The three-way alliance has half the votes and Tamar has been on and off with Kandi all season. She’d be an easy person to convince to keep Kandi so long as the two don’t argue right before the eviction.

On the other side of the house, Tom has been flipping back and forth on his plan to go after Ricky but the best thing he can do at this point is to stay the course. If he just says they’ll get Joey out, Natalie will never have to show her cards and Tom will think they’re still in a solid final 5. If Tom does say he still wants Ricky out, Natalie will be forced to go against him and he’ll at least know she’s not really working with him. Tom has been making a series of bad moves during his HoH reign and I feel he’s going to make one last bad move by flipping back to vote out Joey.

Had he nominated Tamar and Kandi with the intent to backdoor Joey, he would have flushed out Tamar’s power while also controlling who is on the block after the veto meeting. He still could have backdoored Ricky if he wanted and Lolo and Nat would be forced to fake work with him for at least another eviction or two. Instead, Tamar still has the power, his alliance is falling apart, and now he really has almost no control over who goes home this week.  Oh, on top of that, the girls have actually reeled Joey in quite a bit so even if they do keep him, Tom is going to think he’s cool with Joey but the girls are actually closer to him now.

Put it simply, this was a bad week for Tom and he’s screwed.

As far as not knowing who actually had the power, that isn’t even an argument because Tom said a few times he thinks it’s down to Tamar and Kandi. Plus, anyone with half a brain could have noticed how terrible Tamar was at lying and quickly realized she was the highest contender at having the power. It’s so frustrating to see someone having a solid game and then overthink themselves to screw their season. Oh well, that’s the show for you.

Houseguests are sleeping, so I’ll be updating this thread a little later when things get rolling. Veto meeting could be today or tomorrow but I’m expecting today just to give editing the extra day to put that in Saturday’s episode.