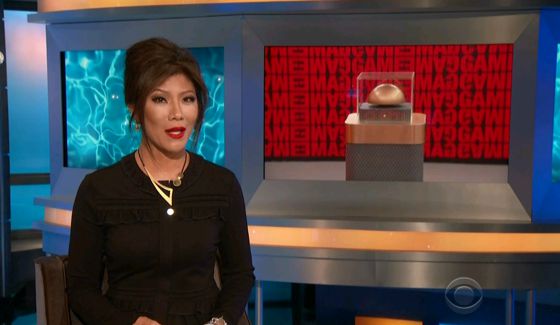 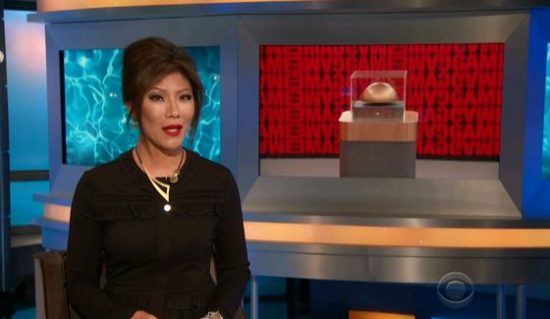 It is always amazing how quickly the game can turn inside the Big Brother house. After an incredibly slow and painful start for the girls of the house, they started to wage a comeback. By Sunday night, there were talks of putting Frankie on the block and sending him home. Should that plan have happened, the girls and guys would have been all tied up at 3.

However, Caleb backed out of the plan and took the easy route of putting up Victoria as a pawn to send Nicole home.  Her eviction was planned since about Monday and there was no turning back, so the bigger question out of the night would be who was going to go home second in the double eviction.

Shortly after Nicole finished her second interview with Julie this season, the HoH comp began and ended nearly as quick.  It was scheduled to be a multi-part question series where they would show a clip and bleep out a word from it. Julie would then give them the word they bleeped out and the house had to guess whether it was true or false.  The very first question, Derrick chose a different answer than the rest of the house which typically signifies an incorrect answer.  Much to my surprise, he was the right one, everyone else was wrong, and Derrick won HoH after just 1 question.  That’s a big difference than earlier in the season when Julie ran out of time asking players questions.

After a brief discussion, Derrick had his nominations set and ready to go. Pretending it was a house vote, he told Victoria and Christine to get on the block. The plan from the beginning was to eliminate Christine, but she was unaware of said plan.  It was crucial for her to win the power of veto, and actually had a real shot at the maze competition puzzle, but Frankie tore through the challenge and won so fast, he sat there for about 5 seconds before Julie realized he had won and declared it over.

Frankie did not use the power of veto, and it was time to give Christine her surprise.. an exit from the Big Brother house before Victoria.  A visibly upset Christine stood up and walked out of the house without saying bye to a single person. When she walked out the door, she received a mixture of light claps and some booing. I’m sure that’s not the way she expected to leave the house at all.

Julie then revealed a new twist.  The havenot room was converted into this mysterious room containing nothing but a stand with a button on it.  She said if the button is pushed this week, next eviction ceremony will stop before they go to vote, and the entire week will be reset.  The nominees will be safe and able to compete in the HoH and whatever planning was done will go right out the window.  I am unsure if all players will be able to play in the HoH, but I’d assume so.

The HoH competition did not start before the end of the show, so if you want to find out who won, stick around this site or tune in Sunday night!

Check out more of my recaps at OK! Magazine!