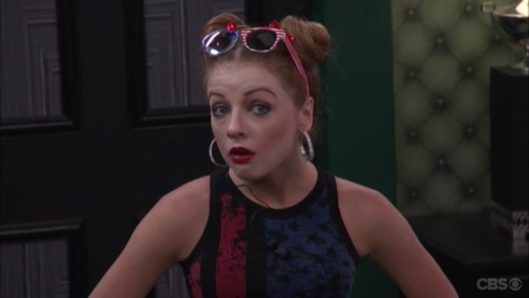 Raven says she’s from Arkansassy but is she also full of $hit? It’s no secret I make fun of Raven A LOT. I’m not the only one so I thought it might be cool to have a thread where we can share our thoughts on her behavior in the house.  I don’t make a habit of picking on sick people, but I believe in an equal opportunity BB  experience for all houseguests.

How will Ravens illness affect her position in the game and is it starting to backfire with her fellow hg’s?

Xmas has remarked how much Raven’s nails grow for someone with nutritional issues. Kevin said he thinks she should go on Amazing Race because she looks so healthy.  (Kevin will probably be the most skeptical of her using her illness for a game advantage because when you’ve been around people named The Cheese and Jimmy Fingers, you feel like you know a thing or twenty.)  Paul asked how her mother could still be alive if she has the same thing and was trying to figure out why Raven will die soon.  Matt questioned her selective limp after she got stitches.  We always wonder how much people are doing for strategy and how much is their true personality when they’re on BB. Does Raven add to her issues for sympathy in the game? She wouldn’t be the first. (Remember Matt Hoffman? He is a member of Mensa coincidentally) Has she been sick for so long that part of her identity is her illness or is it all strategy?  (I have friends who can talk of nothing but their job or their kids, as if they didn’t exist prior to having a family. It starts to become who they are.) Did her time in hospitals during adolescence cause her to associate her illness with attention? She was obviously jealous of Xmas and her broken foot. If you have a person who has an illness, who needs to be the center of attention and is competitive, I think this is what you get. It’s the “one up” syndrome. I don’t think Raven really wants a broken foot but I do think she feels like her illness is her storyline and feels threatened if someone may steal her thunder. It’s probably why when Paul spoke of his intelligence, she told him that she and her mom are members of Mensa. It’s why she interrupted Xmas talking about updating her will to say she has been doing that since she was 14. (What kind of estate does a 14 yr old have to sort out in a will?)

From what I’ve read on Gastroparesis, it seems to be an incredibly difficult disorder to live with every day. I don’t question that at all. I’m only wondering how much she’s embellishing as a strategy.  For starters, is CBS going to put someone in the house with severe medical problems and take on that kind of liability?  (Before anyone compares it to Xmas, I’ll bet she had to sign every waiver on earth to stay in that house. Maybe Raven did too.)

Bonus, before I move on to some things that could be considered contradictions: Raven was a Make a Wish kid but her wish wasn’t to be on BB. I think it had something to do with meeting a famous dancer/choreographer that she auditioned for or something like that. She was also on So You Think You Can Dance. (I don’t know how far she got and that process is very hard on the body)

According to the Mayo Clinic Web site, Gastroparesis is a chronic disorder that effects the stomach muscles and prevents proper stomach emptying. It can’t be cured but can be treated.  It is estimated that 4% of the population has gastroparesis symptoms and an estimated 1.5 million Americans have severe symptoms.  One treatment is with a gastric electric stimulator (not really a pacemaker) which is referred to as Enterra Therapy. The treatment Raven has is described as a “minimally invasive procedure.” (I’m going to cut her a little slack on that one. It’s still like having a tiny iPhone put in your belly.) When the battery runs out, they put in a new one during what’s referred to as “a minor surgical procedure.” Gastroparesis is more detailed than that but this is BBJ, not Web MD, so that’s all you’re getting from me.  I can’t find any source calling it a disease unless it’s a quote from Raven or her mother. I’m sure it’s a very painful condition for anyone to deal with if untreated. I’ll refer to it as GP from here while I list some discrepancies in her stories. Let me point out, hg’s are allowed to lie and/or mislead the other hg’s. and so is Raven. I just think it’s more of a slippery slope if you’re saying you want to get the word out about an illness.

1. Raven refers to it as a disease. (“Disorder” is commonly used, including from people who have it. Note:  Many people who have GP also say they don’t feel nearly as well as Raven appears to.)

2.  She has told the HGs that if she has a baby, there is an 80% chance her baby will have her disease except it will be double. ( The disorder isn’t believed to be hereditary according to the Mayo Clinic, Cleveland Clinic and the Gastroparesis Association for Cures and Treatments, Inc)

3. Raven says she is terminal. (Chronic and terminal have very different definitions. A cough or hemorrhoids can be chronic)

5. Raven says she needs knee surgery and a hysterectomy (Maybe so, but if I only had a year or two, I wouldn’t want to spend it in recovery. I’m thinking  ‘Party likes it’s 1999.’  Maybe that’s just me??)

6. Raven says all 3 of them need new pacemakers every year. That would include Raven, her mother, and her brother who she says also has GP now and needs his first one. (A gastric electric stimulator battery should last 5-10 years according to doctors who specialize in this procedure. I’m also wondering why no one seems concerned with the brother. Is he an asshole or something so they only want to fix Raven? Where’s his Go Fund Me? Do we hear Raven wondering how he’s doing while she’s away this summer? Little bro is being neglected imo. How is bro still alive when he doesn’t have the pacemaker? How well did Raven do in math in high school? She’s had allegedly 4 pacemakers, (sometimes she says 8) has had GP since she was 15 but needs one every year.  How has mom had this for 20-25 years if it kills you in 1-5?)

7. Raven has been a dancer and teaches dance. She has competed on So You Think You Can Dance and beauty pageants. (Things to avoid after having a gastric pacemaker is inserted into you body: sudden and repetitive bending, jumping, stretching, twisting, bouncing and several other things. They also recommend not rubbing or touching where its located. She may need to stop putting peoples hands on it and swearing on it.)

8. Raven has said she didn’t want to take her medication as often as she should while in the BB house.  She said she didn’t bring enough because it’s $15 per pill. (Average cost of Marinol is $1.81 per pill on the high end. Average prescription coverage would cost around $20-$30 for a 30 day supply. Is she taking it and that’s why we don’t see her having vomiting issues?  Remember, she says she vomits 14 times a day. If she’s taking it, won’t she run out? Would CBS let a terminal person on the show who didn’t even bring enough meds to make it till the end? I’m really wanting to hear the BB voice we always hear yell “HGS, WE’VE GOT TO MAKE AN EMERGENCY PHARMACY RUN, STAT!”

9. Raven has discussed more than once how she is when she’s drunk and what she drinks. She describes herself as a happy drunk and she likes going out partying with friends. (Along with avoiding certain foods that Raven seems to enjoy, ALCOHOL, cola and coffee are huge dont’s when you have GP.) 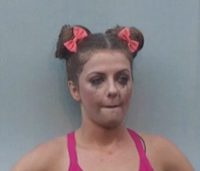 This girl is getting the word out regarding GP and that’s great but I don’t think shes going to make the best spokesperson. I don’t know her medical history and don’t claim to but I think it’s possible that her GP is a severe case and the pacemaker is treating it. Is that white make up part of her strategy or should she be really upset with the lady at the Estee Lauder counter who matched her? Did she really have to send her doctor a pic of the cut on her toe before they could stitch it? Will this strategy continue to work or are the hg’s tired of hearing about it? Will CBS have Dr. Will at the finale holding those paddles in case she’s in shock from not winning AFP? (Yeah, he may not be that kind of doctor but she may not be dying either.)  Mostly, I want to know if Dominique thinks my soul is in trouble for asking these questions?

Disclaimer – This is an editorial piece and the views or opinions here do not represent the official position of Big Brother Junkies.