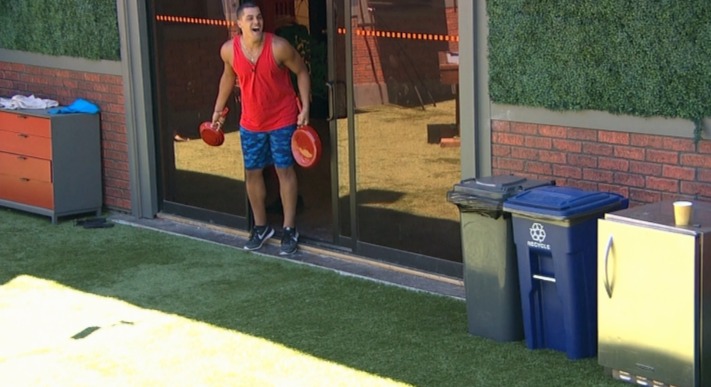 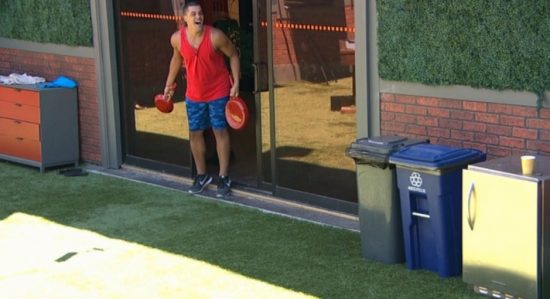 We find ourselves debating last weeks issue all over again. Which came first, the chicken or the egg?  Do we blame production, Paul, Josh, Cody, and Jessica or is it no big deal? Does it matter who starts each argument when they’ve been fighting for over a month? Since I quit my job to be here, I’ll give you my take on it.  If the players put as much thought into strategy as they do pots & pans, playing the victim and imaginary ways to harm each other, they could be playing a good game. The game play sucks but they do bring drama so I’ll give them that at least. Honestly, it’s been their bizarre personalities that’s kept me tuned in so far. It certainly hasn’t been their strategies. They don’t like each other and I don’t blame them. Josh has been called disgusting, loser, fat and a moron to name a few. Cody has been called ugly, unstable, violent and had his military career questioned. Jessica has been called a whore, slut, bald and the C word. Josh goes at them, cries, apologizes and comes back to do it again. Cody and Jessica had almost the entire house go at them but they’ve been hostile to almost the entire house themselves. I see no victims here. I do agree with Cody on one thing. I’m really tired of victim noises too.

After the latest smackdown round of Biiiiiig Brotherrrrrr, we are watching more of the same. Matt and Raven feel it’s unfair Josh was told he couldn’t bang pans anymore but Matts the guy who also thinks he has to start protecting Raven from Cody now. He says everyone should be allowed to play to their strengths and apparently, he feels Josh’s strength lies in joining some kind of a skillet band.  (This is what happens when an ottoman has thoughts) Alex seemed to think she needed to be concerned about being hit by Cody as well. Don’t worry about her though because she has a backup plan. She’s already discussed how Jason should hold Cody down so she can hit him. Little Alex may be growing up before our eyes because she came up with that all on her own. It could be the first plan she didn’t get from Paul. It’s like a baby bird leaving the nest. (insert tear and sarcastic feelings of pride here)

I want to discuss Pauls game But First…we’ve been informed that Raven was injured (eyeroll) during Tuesdays latest incident. She described being hit on the wrist with a pan while she bravely tried to break up the “fight.” Once several people were in agreement that she had no business doing that, she quickly decided that she was only trying to save Alex and not trying to get in between the guys. Raven isn’t going to be wrong ya’ll, not when the story can simply be changed. She said Josh did it but shortly afterward, she and Matt felt it was all Cody’s fault. I’m dying to know what was in that ice pack for future reference because she could put weight on it soon after out by the pool. It healed very quickly!  In case anyone missed it, she has developed a fear of the stairs since she fell but she’s bravely used them this week A LOT so she could plow through Josh’s’ hoh food basket. He isn’t happy about that either. She’s also talked about Cody hitting on her the first week they were in the house. (Hitting on her, not hitting her- with these houseguests, I thought I should be clear) We didn’t have feeds yet but houseguests have mentioned things that sound like it’s quite the opposite. Megan also mentioned this after she left the house. She said Raven kept trying to sleep in the hoh room with Cody and he had to kick her out. Tomato, Tomahto….Xmas bailed during Raven’s storytelling about accidentally being stabbed with scissors while taking out the trash. She said she didn’t want to hear it, got up and walked away. I see the foot cast vs the stomach pacemaker showdown in the very near future.

Let’s get back to the cookware warfare. If you’ve been enjoying it, you have nothing to fear. Josh has said he isn’t doing it anymore but Paul said that as long as it’s only one pan and a spoon, it will be allowed. We know who usually wins this debate. I’ve been trying to figure out why I have a problem with Pauls behavior but I didn’t have it in season 6 when Janelle and Howie would go on a rampage or when Dick banged pans in season 8. I started to look at the similarities and differences to figure it out. Don’t get me wrong, I don’t feel that badly for any of them, I’m only trying to not be a hypocrite. First of all, Paul has said several times that the pans should be allowed because they’ve been done before and maybe that’s part of the problem. When it’s been done, as fans, we’re kind of over it. Paul may be a returnee but the truth is, he knows very little about big brother and its history. Secondly, when Dick banged the pans and terrorized the house, he did it alone, he owned what he was doing and he did it for the purpose of putting the target on himself so it wouldn’t be on Danielle. That’s very different from doing it for the purpose of getting someone to swing so they will be evicted. Even if it isn’t true, it comes off like Paul is afraid to compete against Cody and beat him in the game and that he would rather get him out on a technicality. Season 6 had lots of personal attacks. The biggest differences I see with this year vs season 6 and some other seasons is that when people have been fighting in the past, it was usually 1 on 1 or 2 on 2. It wasn’t the entire house ganging up on 2 people.  (Exception would be Ronnie) Normally, the rest of the house would be trying to break it up. I don’t know if this makes a difference but maybe that’s why it seems different to some viewers.

An argument can be made that Paul not “owning it” (shout out Lisa Rhinna) is smarter. He continues to throw gas on the fire but blames everyone else. That is very smart and why shouldn’t he do it that way? He even went after Mark for not stopping a fight that Mark wasn’t even in the room to witness. I don’t like Pauls methods but he is very good. Mark didn’t back down once they were alone and actually forced Paul to concede a little regarding whether or not Josh was a victim. Mark should have had that talk in front of others and it could have been helpful and opened some of their eyes but since it was in private, it probably just moved him up on Pauls hit list. 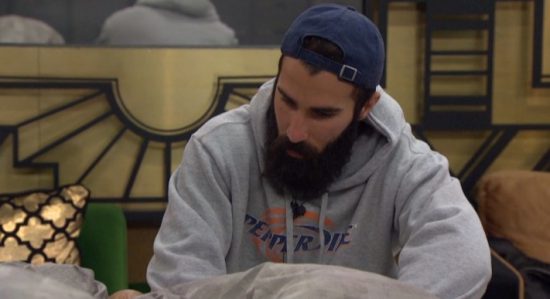 Paul is playing a successful game for himself and unless more showmances get broken up and someone gets wise to Paul, I predict a final 2 of Paul and Alex or Paul and Kevin.  He’s working hard for the money. (Shout out Donna Summer) Kevin, Alex, and Raven will probably be the reason he stays, either with their votes or if they are in power and protect him. He’s built a mini army and he also doesn’t have to worry about temptations anymore. Those temptations were causing him stress and he took care of them. It was sort of funny watching him speculate over Jessicas. He couldn’t believe that it wouldn’t somehow benefit him because Paul thinks every twist is there to help him or for his personal use. He wants to whip them out the way Batman did with the gadgets on his utility belt. He also made sure Christmas used hers the way he chose. Pauls issue with Jessica and Christmas having an advantage was that it was like Robin being in charge of the utility belt. You know Batman would take it away from him and say to Robin “know your role and shut your hole.” That’s exactly what Paul did.

Here are the two things I’ve realized about my lack of excitement over Paul. I’ve said that I don’t like the harassment game. It just isn’t one I respect even if it works. All is fair in love, war, and BB but I like some methods more than others, as does everyone.  I was entertained by Howie and Janelle but not impressed when she called Beau a whore or when Howie said he wanted to eat Aprils’ dog named pepperoni. It was very funny but what impressed me was Janelle’s comp wins and toughness. This was also back when people said what they wanted in the DR and Janelle destroyed them so she was consistent. That brings me to my second issue. I still wouldn’t love the strategy but I could accept it more if Paul would own it to us. I don’t think he should tell the house but tell US. It’s the same reason I didn’t like Nicole’s games last summer. (that and the fact she played it in the plank position all summer) Nicole wanted to sell us the same BS she was selling the house but we knew better. That’s what Paul is doing. During his private camera chat this week, he made it sound like he’s the spokesman for an anti-bullying campaign. He’ll tell us next, like he did the house that once someone gets called fat or picks on a woman, he has to do something about it, Great, go with that to the house minions for as long as you can sell it but don’t insult my intelligence. He needs to realize that I know he’s called Elena fat ass and calls Josh the blob. It isn’t pretty but I can take it if he can own up to doing it. Tell me they’re all puppets and that you have them all fighting. Don’t tell me Cody needs to go because the house is in physical danger. Don’t tell me you’re taking a stand against bullies. Tell me that you are provoking people so you can get the house to be offended once they react to being provoked. The best players let us in on how devious they are.  That’s not friendship. It’s condescending and insulting to me as a viewer. That’s also a couple of possibilities why Paul can be playing a good game but so many people still aren’t cheering him on.