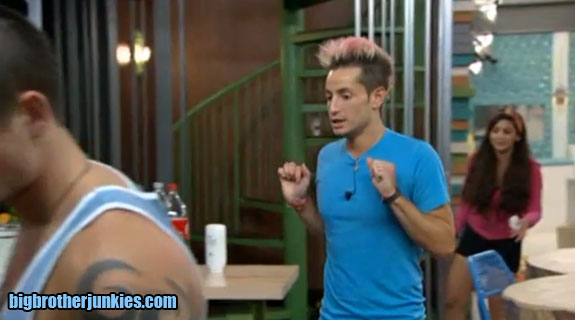 Frankie’s Game Is Just About Over 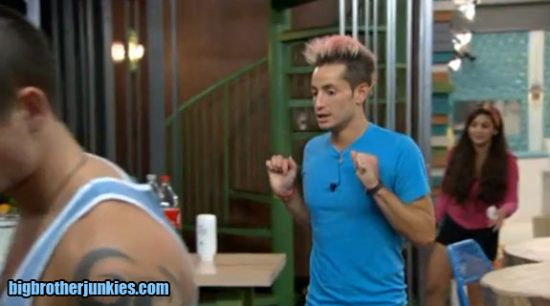 Checking in from the honeymoon!  As I expected, the feeds did indeed go down today and won’t be up until sometime tomorrow evening after possibly the west coast airing of the eviction.  As I type this, they’re likely having their eviction show and Frankie should be receiving the bad news.

Where did his game go wrong?  That’s hard to say exactly.  He managed a lot longer than he originally anticipated as was able to ally with the ‘alpha males’ of the house early on.  His social game was pretty decent and even had the support of America behind him (before he made certain comments about Victoria that is).

Being a member of Team America, he was behind quite a few of the lamer challenges, like putting on a play instead of saving Donny, but he also had a few good moments like his reaction to the fake rat.   The moment of the season came when he was the #1 target and knew it was time to come out as the brother of a big singer.  Caleb was sitting out of the battle of the block just before that, and suddenly they became best friends.

I think Frankie’s biggest mistake was simply playing too well. Winning all of those competitions did not go unnoticed by the house.  That’s all there really is to it.  Frankie going home is typically the reason why most people throw competitions throughout the season, especially early on.  In Big Brother, the better you are, the more of a threat you are.  This isn’t Survivor where starting a fire and cooking can keep you in the game a lot longer than deserved.  In Big Brother, floating is better and that’s why we should see Victoria still in the house when the feeds return tomorrow night.

Sorry for the weakish post. I had a long day but had to give you guys an update!  If you notice comments not being approved for some time, that’s because I’m not in the hotel room to check. So please be patient!

Have a good Monday night!