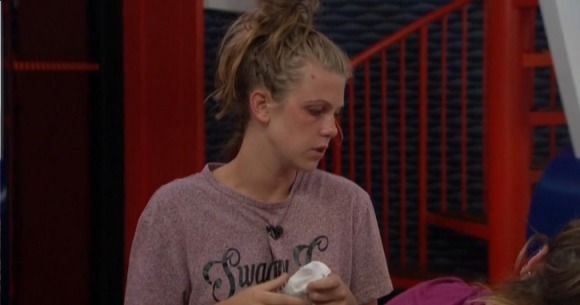 Good afternoon, everyone!  I hope everyone is having a wonderful Friday!

Last night during the CBS show, it clicked for me. When Haleigh walked by Tyler and said “nice speech” after the PoV meeting, it became official. Haleigh and Tyler are my favorite BB rivalry in years.  Neither are mean-spirited about their game. Both know it’s only a game and are playing it that way. That’s how Big Brother should be and it’s so insanely refreshing to have this cast after the mess that was BB19. Nobody wishing someone got cancer. Very little (if any) actual bullying other than what’s expected in a game like that. Personal shots are also limited and the biggest offender of personal shots walked out the door last night (and her personal shots weren’t that bad. Just bashing the ‘entitled rich kids’)

I’m not going to lie. I was concerned about the lack of actual drama in the house as we really only got the very quick Kaitlyn/Brett fight and that afternoon of Bayleigh vs Tyler, oh and Rock’s brief time with the pots and pans, but all of that was quick and long forgotten. Even at Bayleigh’s eviction, she apologized for losing her shit that day and that basically summed up the season. A bunch of gamers who really want to win but recognize that in the end, it’s still just a game.

On to this week: Fessy is in power but once again, Level 6 may actually find a way to squeak out of this jam. It will be absolutely incredible if they’re able to, and I wouldn’t be shocked if they did. JC somehow managed to convince Fessy that Scottie was actually bad for their game which could result in Scottie being a target this week. If anyone but two level 6 members are on the block together this week, there is a good chance the alliance remains together. Fessy can break a tie but with 3 of the 4 voting and Sam as a link to Tyler, they win any vote.  Fessy doesn’t know this as L6 is still somehow under the radar so it is possible. I’d like nothing more than for a random person to get the boot this week to keep pushing to a Haleigh vs Tyler final 3 scenario.

Time for some updates!

Alright, this is a long post and noms haven’t even happened yet. I’m going to eat then create a new thread to cover post-noms

Update – New thread is up