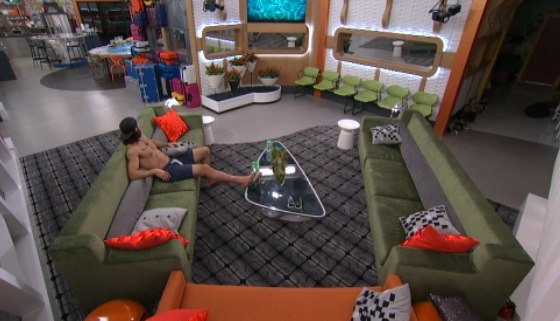 Victor and his allies plot a strategy

Well, the Battle Back is officially over, and pretty much what I expected to happen, happened. I picked Victor or Tiffany as the returning players, and of course they were the two who faced off to re-enter. I am a bit surprised Tiffany did as poorly as she did on her round, but nothing else shocked me about that chain of events. Jozea dominated Glenn, but lost to Victor in a match that was probably edited to look closer than it actually was (I bet Jesus Jr was practically crawling back to the platform toward the end). When I realized Bronte’s comp would be a mental one, I improved her odds slightly, but I still knew she’d lose. Look, Victor is arrogant, and has a pretty annoying laugh, but the guy is a damn beast. He’s one of those rare players who have everything it takes to win these type of competitions (intelligence, endurance, and strength), and if he goes with Frank, those two will be deadly in the next HoH competition.

Speaking of HoH.. we still don’t know who won, but seeing as Victor was not given any form of immunity that we know of, he’d better have played his ass off because I have a strong feeling he’ll be sitting on the block next to Frank if not (note – I am surprised they did not give him immunity. To their credit, Big Brother has done a fairly good job with these twists this season, so if they just leave him hanging, that’s pretty dumb). Speaking of Big Brother and Victor, I read a bunch of people say they messed up in the DR sessions. They filmed Victor with the belt a lot, so they thought that gave away the winner, but it didn’t. Those DR sessions were clearly done shortly after each competition which was done shortly after each respective HoH comp a week apart from each other.  I know it looks strange, but they didn’t mess up. That is why Jozea had the belt in his winning DR session but not in his losing one a week later.

Alright, an hour or so to go before feeds go live. I have no clue what we’ll learn when they return, so you’ll be finding out along with me!