I’ve been away from the computer watching the latest “Toddlers and Tiaras“, and the episode featured Brock, the future Big Brother contestant. 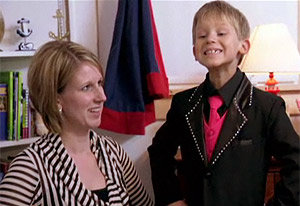 I gotta say, his parents are incredible for being so supportive of him.    It was refreshing to see in that show with a lot of crazy parents.

Anyway, now it’s time to settle in and see how the goldfish are doing in the Big Brother house.  I would call them hamsters, but someone else already has that covered… but don’t worry, I’m not going to completely rip them off.

Since we left off, CBS has confirmed Dick is definitely limp, but hasn’t given specific reasons.  Based on the contract that reality blurred posted the other day, I’m thinking his boot was because of the video he took before he went in the house.   He told a friend to release the video after he was in with a plug for his website in the video.  Pretty sure that broke two major rules of no using Big Brother to promote crap, and the fact that he broke his NDA that likely told him not to tell a soul he was going back in.

Also, videos went offline earlier and likely had to do with the veto competition.   I haven’t quite confirmed who will participate in the challenge yet, but if/when I find out, I’ll post.  There are a few houseguests tossing a ball into metal cans that looks like they’re practicing for a challenge.   Here you have Daniele handling her balls… 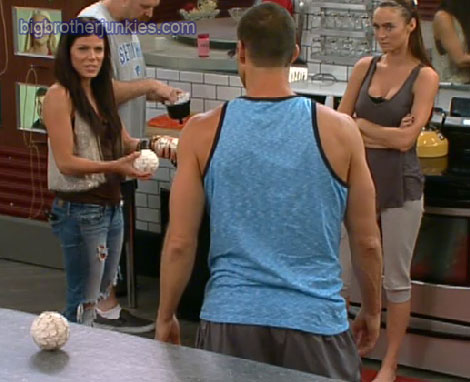 Then of course we have the party animals, Jeff and Jordan 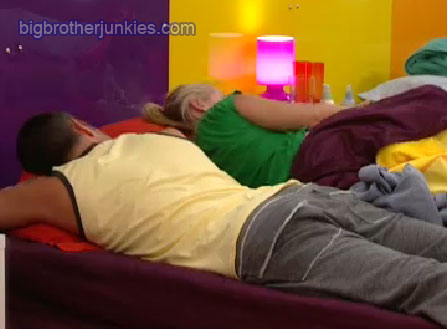 I’ll be doing updates as they come up in this thread, so keep checking back!

6:09 PM – Cassi and Lawon in the room chatting about the events last night with I assume Keith?   – Or possibly sharing beauty secrets.. or both… 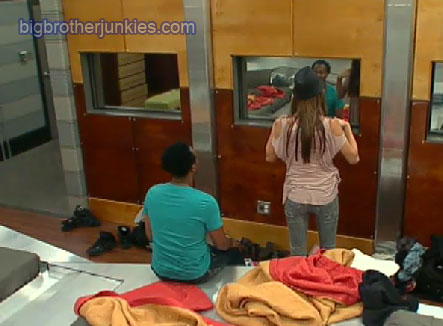 6:14 PM – Daniele, Keith, Shelly, Jeff and Brendon are all around the kitchen just throwing a ball into a metal bucket.

6:22 PM – How many times do you think we’ll see Cassi do her hair this season? 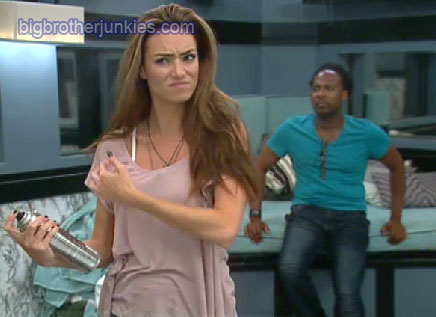 6:23 PM – Adam and Keith laying in bed staring at the ceiling between talking occasional strategy.   I think Adam is losing it a little.. must be a tough adjustment period

6:32 PM – Yup, Adam is losing it.  Just staring up at the ceiling doing absolutely nothing.

6:35 PM – Live feeds are off, looks like they’re doing the POV competition I’d guess.    I’ll update later when they’re back on. Thanks for reading!   Make sure you click on the banner below and sign up so you can see the feeds for yourselF!