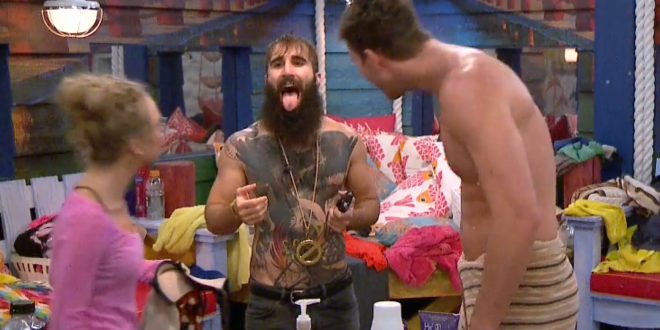 Guess who is getting evicted: Evening/Overnight Updates, 8/20-8/21

Good evening, everyone!  I started this as a post-veto comp update but it may be a fairly early night because some of the houseguests spent the whole night studying for the comp and not sleeping.  So far, there was lots of smack-talking by Paul initially following the veto but conversations in the HoH and other parts of the house indicates that any replacement nominee will be safe.

About the featured image – several are feeling a little under the weather due to lack of sleep and the wet nature of the comp.  So, Paul isn’t really doing the “neener, neener, I won the POV” face.

Since it’s just these three saying the same things over and over again, I’m going to call it a night.  I will check the flashback in the morning.  Goodnight, everyone!!

Vic said he is going to be the latest in bed this week.  That means more of these chats with America!