Let’s See What Happened In The House Last Night..

Good morning, Junkies.   Yesterday the house was more active than I’ve seen since the feeds started with tons of skin, and actual game play.  The best kind of feeds for those who want to see Cassi’s newly discovered weird looking butt (which disappointed both Mrs Beans and myself – yes, she liked Cassi), but the feeds also provided plenty of game talk, scheming, pleading, begging, and fighting.. basically, a night you’d expect in the Big Brother house.

Before I went to bed, we watched Big Brother After Dark and were strangely fascinated with Adam and Porsche playing chess, and four houseguests playing a game of toss the bean bag.   I don’t understand why such basic activities are strangely addicting to watch for us, even when I can’t throw darts at them like in the live feeds.   If you like that stuff too and want to get more of it through the day (including throwing darts and tomatoes at people), sign up for the live feeds here.  They’re definitely pretty entertaining and addicting.

The house didn’t stop after I went to bed, so let’s turn to Ollie Williams for our overnight report… 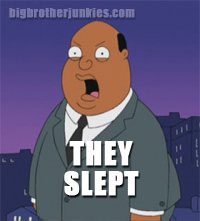 If you do want to find out the details of the overnight report (for those houseguests who weren’t sleeping), I am going to strongly recommend my friend Jamie’s blog.  She does fantastic overnight reports.. check it out here.