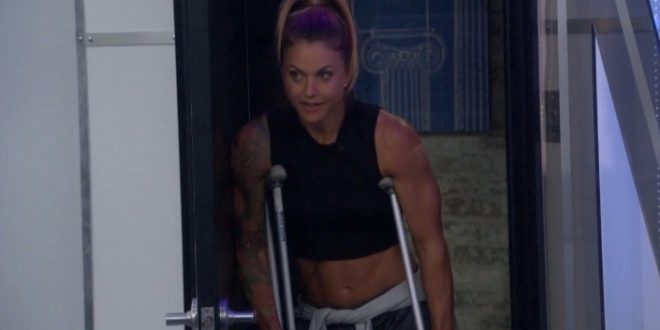 It’s A Christmas Miracle – She’s Back! 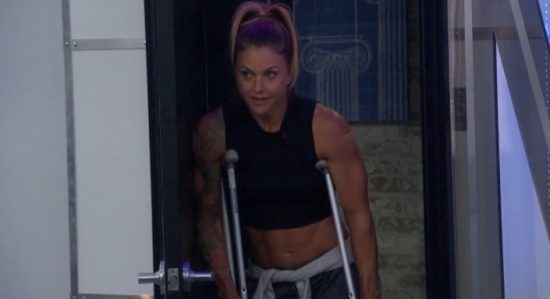 Every morning Big Brother plays a song or three to wake up the house. This morning they decided to play “Save a horse, ride a cowboy” to which Christmas said “hell yea!” and ran to find Jason.  She jumped on his back and he ran around the house like a crazy person.  When they went outside, he slipped on the grass and Christmas took a hard landing and hurt her foot.  He went to get help, she was carried off by Matt and Cody and out of the game for a few hours.

During that time, there was a lot of game chatter seeing as Christmas is on the block and the house needed to figure out what to do if she’s gone. Will Cody be forced to nominate his 6th person of the week?  Should they keep her in the house because she suddenly becomes no threat to win competitions (except trivia)?  Should they evict her anyway because she is still a beast and told people she wants to come after Cody (and probably Jessica)?

Jessica was one of the people really flipping on this decision as she knows kicking her out after an injury would look bad, but getting rid of someone who is going after you while you have a chance is not something to be missed. However, her main girl ally in the house – Elena – is far more in favor of keeping Christmas because Paul has been in her ear about it. Elena appears to have put Paul on godlike status so by keeping Christmas she will have gone the extra mile to earn back his trust. Of course, overall she shouldn’t care about Paul and they should just be waiting for two more evictions until they can get him out, but veterans always seem to find a way to get newbies to do their dirty work.

At 2:21, Christmas came hobbling back through the door and told the house she had definitely tore some ligaments in her foot and has to leave again on Wednesday to get an MRI to see if any bones are broken. That means there is still a chance Christmas gets the boot (no pun intended), but it also means the house may just vote her out so they don’t have to keep wondering if she’ll be removed from the game at some point.

Busy afternoon in the house.  I will be starting a live feed thread in a little while for the evening to cover anything that is happening tonight.