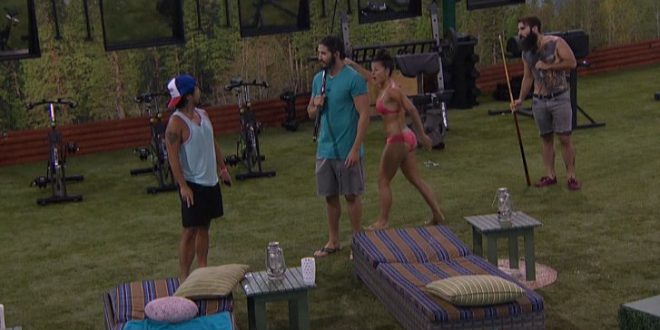 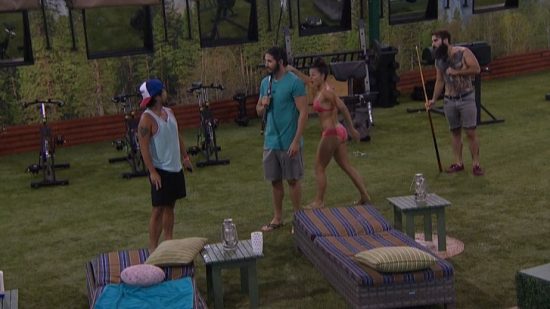 Whenever the house is stale, you can always bring a megaphone to a party to stir things up.  That is exactly what happened last night at 12;19am when Nat, James, Victor, and Paul were outside when they heard a message being repeated from the outside. “James..Nicole..Pregame-Alliance”. As you can see from the image above, Paul, Victor, and Natalie staring at James is pretty much exactly when they figured out what the message was saying.

Now, as far as the actual message goes, very few know if it’s actually true. I certainly don’t, and every season we always hear rumors about this and that happening that never happens. James and Nicole, however? That’s a tough one. Could they actually be working together privately?  If so, they’re doing a pretty damn good job hiding it from the feeds. Scratch that, thinking back, they’re doing a shit job if true. A month or so ago, Nicole and James were talking about their final 4 alliance and how they can split the money with each member if one of them wins. Now, if they really had a pregame alliance, I really doubt that conversation would have ever happened. Not only did production slap them for it, they made both James and Nat go declare that they’re not going to give prize money to anyone.

I just can’t see the pair having a secret alliance that apparently didn’t need any discussion through the entire season, only to have their showmances pair up toward the end of the season and then get sloppy about the rules of the game.  Makes no sense to me.

That said, it would certainly explain Nicole’s random change of heart about voting Natalie out this week.

What do you guys think?  Did they have a pregame alliance?  Or do you think the megaphone dude is just spreading gossip he thinks to be true?