Julie Chen Is Officially Done With The Talk 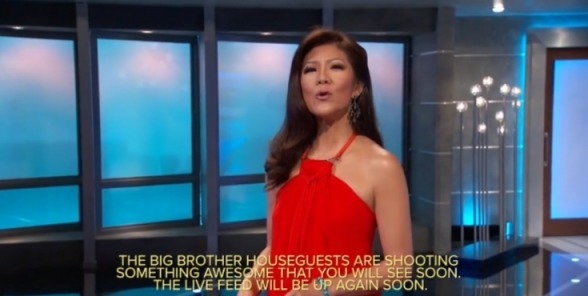 In the least surprising move of the day (or week), Julie Chen-Moonves has made her exit from The Talk official today with a taped message at the end of the episode.

I’m guessing the taped message was to prevent her from pulling any more shenanigans like using her husband’s last name for the first time ever while signing off last Thursday.  That Julie, always the prankster.

I know the question everyone here is wondering is her status on Big Brother and to that I can say I still don’t know. As I said last week, when she took that obvious shot at CBS during her sign-off, the chances of her actually returning to anything CBS related were very slim. I actually said that I can’t see her actually returning to Big Brother after that, but it appears she’s going to give us the 3 remaining episodes on her contract. Her future with the series is strongly in doubt.

People are already speculating who would host the show next year, and my opinion is that it shouldn’t be anyone they’ve tried to push on us recently. No Jeff. No Ross. No Marissa. Other than the fact that they’re all terrible, I’d like to see them go in a fairly new direction. Any new host should go through the casting process just like anyone else and not get shoved in front because they’re fan favorites despite being horrific with interviews (Jeff).

The new host, however, is the least of my worries. I’m growing more and more concerned about the lack of renewal notice for a show that CBS just bragged about…

How are they going to tweet something like that but leave us all worried about next season?  The show is still crushing summer ratings and it’s not like the prize money is killing them. They haven’t increased that since the show began. What’s the delay?  8 days ago, I posted a rundown of all the recent renewal dates and said that I overreacted because this was par for the course. Well, looking at that list, we’re now tied for the second longest delay in announcing a renewal since they announced BB11 on 9/18/08. They still have 8 days left in the season and didn’t announce BB17 and 18 until the season finale of BB16, but Julie’s husband wasn’t recently let go by CBS that year.

I still can’t see CBS just letting this show go out of spite. I’m sure the delay has a lot to do with Les/Julie and they just need to make sure their ducks are all in a row before officially signing on for another season. For all we know, the show is being held up by Julie’s contract and they have to wait until the season is over before announcing a new season without her. I’m sure her contract is pretty ironclad and may actually have something in it that prevents them from renewing the show without her signed on to host.  I believe it was Scottie who said their contracts with CBS end around the first week in October, so perhaps that is when Julie’s ends as well and they’re just waiting for that to announce a new season.  I don’t know, I’m just looking at it optimistically and guessing what the holdup could actually be.

If Big Brother is not renewed by mid-October….