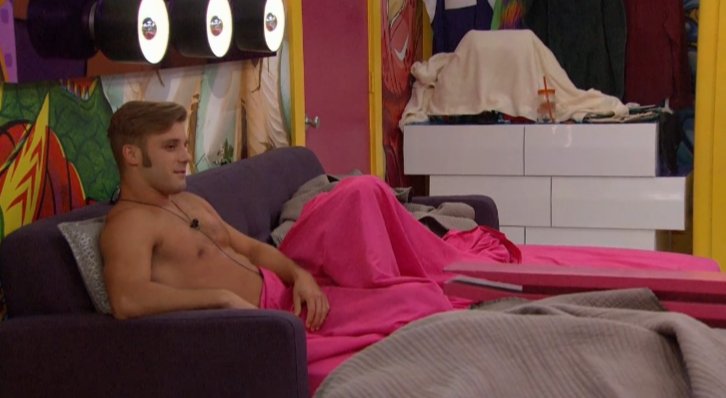 Notice – Roger Goodell wants to keep annoying me, so there are a bunch of NFL pre-season games on tonight. Be sure to check your local listing to make sure one of those pointless games aren’t interfering with Big Brother (btw, before I get hate mail, I am referring to the pre-season being pointless. It’s essentially 4 games of trying to keep a team healthy)

What a big turn of events over the past few days inside the Big Brother house. It was so crazy, I had to break from my typical Thursday afternoon at the beach to talk about how James holds so much power tonight (watch video here). While it is not at all shocking that someone saved their game in the span of Tue-Thur, but what is shocking is to do it while simultaneously sinking the game of the current favorite to win it all. Paulie was in such a good position only a few days ago, but Michelle got so far in his head during the power of veto meeting that she may as well set up a bed and live there. Those who only watched the CBS episode are thinking “Well, I didn’t see anything big”, and that is because they cut out a lot of what Michelle said from the show. If you notice, she said something along the lines of “Congratulations on all of your competition wins…” before being edited into the closing statement.  Well, between that, she pointed out how Paulie has played in 6 veto competitions and has won 3 of them.

Many would brush that off, but Paulie’s ego wouldn’t let it go. He couldn’t be called out in front of the entire house like that, ignore it and then and just cruise his way to $500k. If you remember early in the season, he even told Tiffany that he was “bred to play this game”, so there is now way he’ll let Michelle or Natalie run around this week and talk shit about him behind his back (apparently in the breeding process, they messed up and added just a hair too much in the ego department).  We covered it here, but the short version is that Natalie approached him and said he’s a good person. In return, he said she’s as fake as her chest. This resulted in Natalie eventually approaching him once again to try to clear things up, and him just hammering her down to the point she eventually had to leave the room (You can watch this around 1:50am).

He slammed her because Natalie entered the house as a pretty big flirt, going from Corey to Victor to anyone who would talk to her then finally to James. He said by her calling him out on flirting was a double standard for that reason . He also said it’s stupid because Paul and Corey have both joked with her in flirty ways, but she singles him out.  What Natalie tried (but failed) to point out is that the difference is Paulie has still been flirting with Natalie despite clearly having a thing with Z. It’s a respect issue more than a flirting issue.  Paulie didn’t see it that way (or maybe he did), and he kept shutting her down every time she spoke.  (for the record, Paul hardly flirts with anyone, and Corey stopped flirting with everyone as soon as he fell for Nicole)

Yes, that was the short version

Time to wrap this up before the double eviction episode begins.  Seeing as Thursday night is my biggest night, I want to thank everyone for their support this season. The compliments, the donations to help my trip (donate here – shameless plug), and the all around support you have shown this site and our writers.  I obviously won’t be live blogging next week, so I wanted to get that out before I took some time off.  (If you’re wondering, we will still have updates from our amazing backup writers)

And that’s it.  HoH will be played later on tonight, so stay with us and I’ll tell you who the next HoH is….