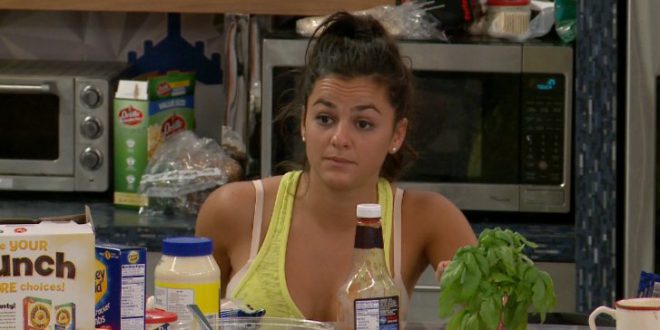 It was a surprisingly busy afternoon in the Big Brother house when James approached Paul at the kitchen table to ask if he had mentioned his name about being paranoid.  This blew up into this huge argument with Paul calling Michelle a c*nt, and saying she is mean to everyone then cries about it because she’s worried about America hating her. One thing that annoyed me, and has annoyed me this season was this stupid “If you put my name in your mouth….” saying. James uses it a lot. Da’Vonne said it a bunch of times. Everyone freaks out if they hear someone else in the house mentioned them in a conversation. What do they expect? Of course they’re going to hear their name coming from other players mouths. That happens in games like this. Drives me crazy.

Also, I loved how James threw out the major veteran card during the argument. “This isn’t my first rodeo, I’ve been in this house 150 (or some shit) days. I’ve played with some of the best players and hung out with some of the best”.  A little note to James – First, you haven’t played with the best players. BB17 had a horrible cast when it came to strategy. The best player couldn’t even win the entire season, and the winner was a weaker version of the overrated Ian (note – Ian is a good player, but some newer players act like he was one of the best ever. He wasn’t even the best that season, he just had a bitter jury to help him win).  Secondly, at this point, everyone in the house are considered veterans. James may have logged more hours, but 75% of those hours were spent up the combined asses of Meg and Natalie, so do they really even count?

Sorry for the rant, but James playing that is the celebrity version of “do you know who I am??” when they get in trouble. Drives me nuts.  Also, I didn’t mean to gloss over the comments by Paul to Michelle.  She really has been a mean girl this season, but throwing the c-word around was dumb. Paul loses some BB Points for that remark. Michelle also loses some points for making an ass out of herself by butting into that argument in the first place. It was funny when she did it to Paulie, even though her arguments were equally awful, but now that act is just getting repetitive  (I seriously should keep a BB points tracker and add/subtract arbitrarily, like they do in Harry Potter).

Ok, wrapping up, time for the live updates:

This competition is going to finish on the feeds, so be sure to sign up!  It’s a free week

Time to run and get a coffee, and start a new thread about this competition.