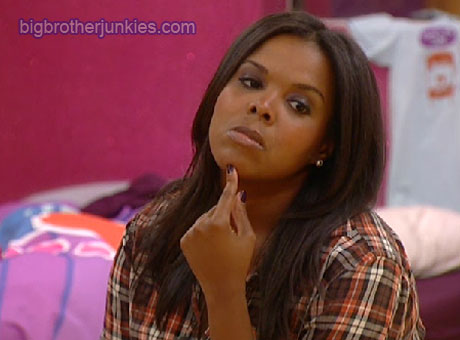 The live eviction show is over, and like I predicted minus one vote, Lawon was voted out, had to compete against Brendon and lost.  Daniele is screwed and knows it just by looking at her face as she tried to watch the competition.

Right now Rachel and Brendon are back in the house being gross with each other, and Daniele is clearly licking her wounds.  No word yet on the HoH competition but keep checking this thread for updates or get the superpass with 3 days free to see for yourself!

7:10 PM – Brendon and Rachel in the purple room together talking about marriage already..  man.  Shoot me.  It’s going to be a long second half of the season.

Get The Live Feeds Right Here

7:15 PM – Kalia and Daniele in the room sulking about making a horrible decision, and Daniele complaining about how stupid the competition was.. I do agree with that.  It was a terribly easy competition, but perhaps they made something Lawon had a chance to actually win.  Of course he failed miserably.

7:20 PM – The fab five are in the have-not room listening to the war stories about how Brendon had to suffer a whole week away from Rachel.   Jeff responds with a fart.  I love Jeff

7:24 PM – Jeff joking how he can now punch out from watching Rachel now that Brendon is back, and he expects to get paid!  Shelly tries to jump into the fun like a nice 5th wheel.

7:29 PM – Brendon: I tried to read but I just started thinking of her so it was tough.  What the …   grow up, bro.  I understand you’re in love, don’t act like a pre-teen.  Jeff keeps farting though to actually make this conversation enjoyable

7:36 PM – Brendon admits if he had to compete against Rachel, he would have thrown the competition.

7:39 PM – Brendon: “Isn’t it nice when you know people are scared of you?”   Right, but he denies intimidation tactics?

7:41 PM – I think Shelly would be pretty hot if she didn’t look like she’s been smoking since 10 years old.   She should be on ‘anti-smoking’ posters.

7:48 PM – I almost feel bad for Kalia talking about how she can’t live in the house now, but I don’t because she made a very obvious stupid decision and I am almost happy she gets to bask in that for at least a week now.

7:52 PM – It’s going to be very difficult to blog / watch feeds with Brendon back.  The game is pretty much over right now, at least for Daniele, Porsche, Adam, Kalia, and probably Shelly. Good job on playing to lose, newbies.

8:02 PM – Adam and Shelly talking in the pantry together about how dumb Daniele is playing.  It’s funny listening to them bash other people when they clearly made horrible moves thinking they can beat the fab four in the end.

— going to take a little break because there is still no announcement on the HoH competition, I will update as soon as I find out! —

8:45 PM – No new updates yet, just a bunch of chatter about the lovebirds tonight.

8:56 PM – HoH competition just started, but live feeds went to trivia so we won’t know what happened until the feeds come back up.  That’s lame.  I’ll update if they’re back before I go to bed