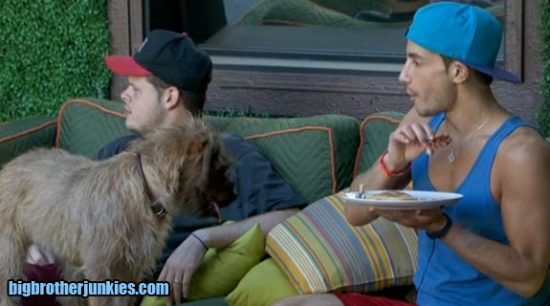 Because the house is so incredibly slow and boring, they decided to let Izzy in. He is apparently a trained Hollywood dog, and looks to be an expert in begging for food. Unfortunately, Izzy is only there for one day, but I strongly suspect if he remained in the house, he would have a better chance at winning the next HoH over Victoria.

So, I am back from the dentist and trying to catch up on stuff that happened.  It looks like Izzy is the biggest thing that will probably happen all week, so I guess tonight is Izzy night on the live feeds.

As the season is winding down, remember to subscribe to my personal facebook page for any updates on new blogs I may create, or any other updates in my life if you’re into that.

Tonight on CBS is the Veto competition (which means nothing), but we get to watch them pretend it actually really means anything.  I guess it’s a good time to work on my homework in advance so I’m not spending my honeymoon writing essays.

Note – I have people have issues with cannot locate page for the facebook link.  It was because I turned my page off to search engines so you needed to be logged in. I changed it