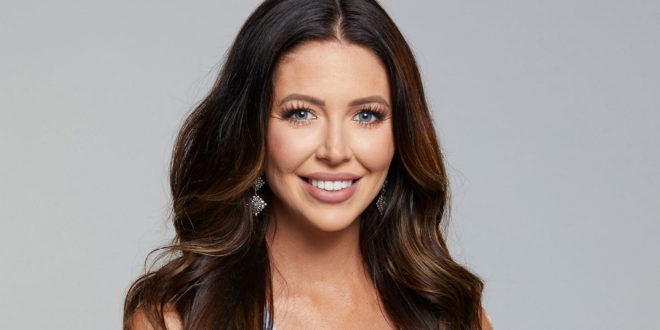 Where to begin with Holly? Let’s start with what isn’t mentioned in her bio. She is former Miss Wyoming which I guess isn’t all that impressive, but she was also the girlfriend to someone on the Bachelorette named Luke Pell. I guess he was on season 12 and finished in 4th place but gained enough fame to have a million articles online about his love life after the show. I don’t watch the show, although I probably should because it would give me something to blog about, but there is that.

I will say that I’m already a bit of a fan because she is honest enough to say she hasn’t watched the show enough to have a favorite and was sarcastic about her strategy to win. Many newbies try to pretend they’re lifelong fans but clearly have only watched 1-2 seasons. May as well embrace your lack of knowledge especially considering it gives you an advantage heading into the show. Players have learned to fear superfans, so the less you know about the show, the less threatening you appear to the rest during the first few crucial weeks.  By half the season your knowledge of the show doesn’t really matter as much but people will vote you off for the smallest reasons the first few weeks.

I sense a little drama coming from Holly because she is clearly just going on the show to increase her fame and may want to play things up for the cameras. I don’t think she’ll take winning as seriously as she’ll take popularity so expect her to go in hot. I see her out around the time jury begins. She may squeeze in, but I doubt she cracks top 5.

Three adjectives that describe you: Spontaneous, sarcastic, and relentless.

Favorite activities: Fostering dogs, hiking with wine, and road-tripping with a camera in hand.

What do you think will be the most difficult part about living inside the Big Brotherhouse?
I live on my phone. I’m a millennial. That will admittedly be a struggle.

Which past Big Brother cast member did you like most?
I haven’t watched it enough to have a favorite.

Do you have a strategy for winning the game?
Oh, I have plenty of strategies already stacked up. Plan A-Z.

My life’s motto is…
“Make them proud.” I’ve lost a lot of people in my life and I always try to say “yes” to opportunities because I wish they were still here to experience them all too.

What would you take into the house and why?
– My dog (fat chance).
– Headphones to listen to music.
– A book to keep me sane.

Fun facts about yourself:
– I grew up teaching people to fly fish.
– I can sneeze like Donald Duck.
– I can ride a horse standing up.
– I rolled off of a 30 ft. cliff in a pickup truck and survived.
– I used to go down the Oregon Trail every summer in a covered wagon. With a bonnet on my head.