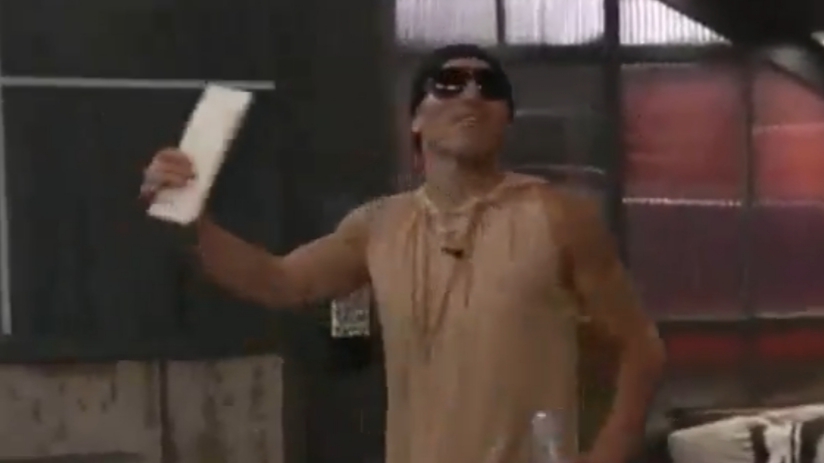 With the third week wrapped up, the power continues to ride with one side of the house. A big alliance is out of power while another took it. There is yet to be a female Head of Household and male evictee.

1. Cody – Cody’s fellow Jersey resident Enzo sits in the HOH room with all the power to nominate this week. You might think the HOH guarantees someone’s spot as #1 here, but not when the HOH is so close and dependent on someone else. Cody is so far from being put up that he might as well sit on the edge of the couch farthest positioned farthest away from the nomination chairs.

2. Enzo – The Head of Household for week 4 has a lot of power this week, guaranteeing himself and close allies Cody and Tyler safety. Enzo threw a rogue vote for the second consecutive week in Janelle’s favor during the Janelle vs. Kaysar eviction, but he can’t do that a third time this week. Enzo is the only houseguest to win a safety suite, Veto, and HOH competition. He has 3 competition wins this season, which is a nice note on his resume.

3. Tyler – The former HOH did a lot during his week that wasn’t shown during the show’s edit. He used the privacy of his room to have conversations that enhanced relationships while socializing out of the HOH room. The biggest crack came when David dropped his name to Da’Vonne and Bayleigh. Since that wasn’t Tyler’s fault, and things look relatively safe for the Hilton Head native, he remains in the top 3 this week.

4. Nicole F – This season’s arch-rival to Janelle didn’t even give Janelle a goodbye hug. From the look of it, Janelle didn’t care. Janelle looked stoic even with a mask covering her face as Nicole told Janelle to not come to her wedding, continuing the feud between them. Nicole is tied to Ian, which he serves her as a parachute. Most houseguests are still not thinking of targeting her. She is close with Cody and Tyler, giving her two strong meat shields. Her game, like a handful of other houseguests, is similar to her gameplay of seasons’ past. The exception is she is not in a showmance.

5. Christmas – Christmas wasted no time discussing game with Enzo. She brought up that there are other targets besides Kaysar in the house. It would benefit her game to keep Kaysar and let Cody, who vocalizes his desire to get rid of the 2-time all-star, go after him. Christmas is allied with Tyler, Dani, and Nicole, but does a good job maintaining relationships with the people on the other side of the house.

6. Dani – The S9 and S13 veteran was all about getting the “queen” of BB dethroned. She got her wish and appears confident that she usurped Janelle. However, she threw that rogue vote to keep Janelle. I expect it was a ploy to target another player. This cast looks disinterested in figuring out rogue votes unlike last year where a such a vote turned the house into a series of whispers. Therefore, Dani’s move may be inconsequential. Like S13, she went against an older player in the house. This time, she might go farther.

7. Memphis – Memphis is a member of the original 6-person alliance, The Commission, that kicked off this season with 3 straight HOH reigns. As we enter week 4, a different 6-person alliance called the Slick Six holds the power. Memphis’s stock has decreased since eliminating a floater in week 2. He could be a backdoor option, but that is unlikely because Enzo’s closest ally, Cody, will be in Enzo’s ear all week. Cody and Memphis were extremely close at the beginning. Now, it looks like Enzo has replaced Memphis.

8. Da’Vonne – The houseguest who voted against Nicole in week 2 to stand up for racial equality is still sitting on the outside of power. She does not seem to grasp her role in the house. Unfortunately for her, she is closer to Kaysar, Bayleigh, and David than Tyler, Enzo, or Cody. She might not find herself in the nomination chair, but that window of opportunity to strike the power players is smaller and smaller each week.

9. Bayleigh – The S20 veteran is in a tight alliance with Da’Vonne and rocky one with David (even though the three of them are trying to be in an alliance).  David is putting his foot in his mouth, affecting her game. Nicole F thinks Bayleigh doesn’t like her. Janelle and Kaysar were known associates of Bayleigh. All these things are a recipe for Bayleigh’s eviction this summer. As to when, I expect it to be within a few weeks.

10. Ian – The S14 grand prize winner is the most likely to face a backdoor this week. Enzo has been saying to close allies that he does not trust Ian and will not vote for a former winner to win again. Ian is tight with Nicole, which is good and bad. It is good because he has a connection to everyone in her big alliance. It is bad because everyone in the house knows they are close. Ian had a difficult conversation with Cody, which only hurts Ian’s chances this week. The best time to pull his first comp win is during this week’s Veto competition.

11. Kevin – The ad executive is up to his old tricks. He is in the grass, slipping and sliding remaining low and unsuspecting. Nobody is talking about him as a serious threat, which plays right not Kevin’s hand. He is the purest floater this season. I don’t expect him to win any comps soon and he really has not done much to talk about.

12. David – Oh David, David, David… what is there to say that hasn’t been said already. The guy literally said “rookie mistake” in the Diary Room talking about naming Tyler during the whole Da’Vonne conversation. Production must be aware that many fans find David irritating to watch. He is cutting himself off nearly every week, and last night’s episode encapsulates that. He could have not told Tyler he said anything as well as communicated better with Da’Vonne and BOOM! You have a strong move right there because 1) it throws Tyler and Cody under the bus leading to distrust within a big alliance and 2) he could build rapport with Da’Vonne and Bayleigh.

13. Kaysar – One half of Jaysar, Kaysar is most likely to go on the block. It’s a convenient, simple nomination for Enzo. Don’t expect Kaysar to go down without a fight. He might speak with Enzo 1 on 1 about taking down other targets or offer a deal, but I don’t see Kaysar avoiding the block. Enzo’s closest ally, Cody, has been wanting to see Kaysar out the door since week 1.

14 Janelle – The all-star who many, including myself, think is among the top 5 players to ever play was sent home as the victim of a big alliance power move. This is most likely the last dance for Janelle. In 4 seasons, she placed top 3 twice, played with and against legends like Dr. Will, Mike “Boogie” Malin, Dan Gheesling, Danielle Reyes, Maggie Ausburn, Yvette, and Ian, she was a member of 2 all-star casts, the Sovereign Six alliance, battled against The Friendship, and provided many classic moments cemented in BB history (Bye bye bitches!”). In total, she spent 200 days playing the game and won 13 competitions according to big brother wiki. She will always be considered an all-star. Evicted week 3.