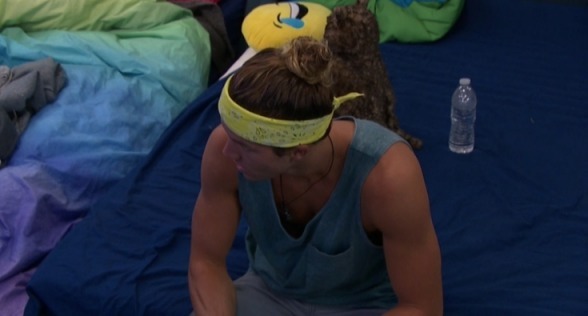 Good afternoon everyone, and happy Monday to you!

The noms are about to be set for the week and we’ll see who Scottie is sitting next to when he gets voted out..err, I mean when he faces elimination on Thursday night.

Sorry, Scoot, but you joined quite possibly the worst alliance in the history of Big Brother and it’s kind of poetic justice they now take you out. Especially considering it was your hinky vote against your own alliance member that set the tone for your season.

If people don’t remember, it was Johnny Badass over there who wore a Swaggy C t-shirt to show his support of the guy only to go in and cast a vote to evict. While that was funny at the time, that little move is a huge reason why he’s going home today because his alliance simply couldn’t have 100% trust in him after that point. Even though he’s been loyal and in these desperate times, any number helps, but when you have a bad player like Fessy as HoH, they’re easily swayed against you.

All it took was Brett casting some doubt on the eviction of Rockstar to put the final nail in the Scottie coffin. Sure, that obviously wasn’t the only reason, but it was the excuse given. In reality, JC got in Fessy’s jealous little head more than anything else and convinced him that Scottie was in love with Haleigh. It’s no surprise what his motivations were this week when he demanded that ‘any guy’ leave the house this Thursday night. That’s just typically not something you say unless you’re in an all-girl alliance and you don’t care which person goes home so long as they have a swinging dick.

Angela, Sam, and Kaycee pose a much bigger threat to Fessy than Scottie, but he demanded a dude go home so this is what he gets.  Shit, Sam was campaigning to him yesterday to nominate the girl Fessy has been swapping spit with this season! Wake up, bro. Wake up.

One of the slowest days I’ve seen in the house yet. Overnight report in the morning if Mel can find anything to talk about!!