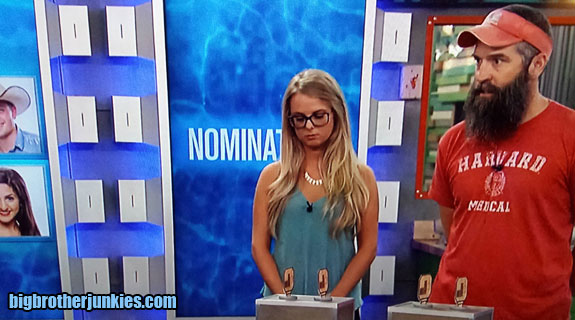 Nicole And Donny Get Some Revenge – Nomination Episode Recap 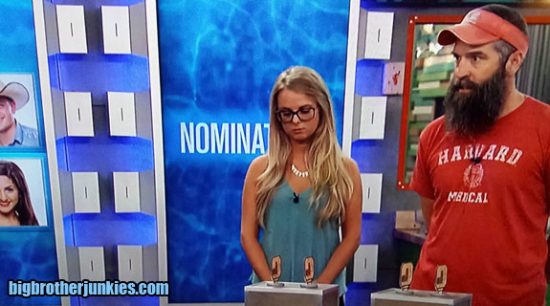 On Thursday night, Big Brother was left with an unexpected cliffhanger, leaving many wondering just who won head of household.  During trivia style competitions, there is like a 99.7% chance they complete it live (I made that stat up). To be quite honest, I’m not sure why this didn’t end on Thursday night as well. After 12 rounds, Julie Chen cut to a commercial break and then left viewers hanging. I thought they were going to go on more rounds before a tie-breaker question, but apparently that’s all that happened when she went back to the house.  More to the point, that competition lasting 12 rounds is definitely a testament how smart some of these players are.  Some may not be very good players, but they’re certainly smart.

The tiebreaker question was counting the amount of seconds a certain veto competition took, and most people were over by a few hundred (or many more in Zach’s case).  Donny was the lowest, Nicole was second lowest and Hayden was 1 number off from Nicole. There could only be two heads of household, so Hayden missed his shot. I think Nicole makes a better HoH anyway because she is not very scared to make moves, despite her passive attitude on the show.

This was the first time nobody from the power group of the house was HoH, so some (like Frankie) were scrambling more than usual. Both Donny and Nicole eliminated Hayden right away, so they had to nominate 4 out of 8 people. That’s probably more of the reason Frankie was scrambling, and he likely will until they switch the format back to the traditional 1 head of household (I expect that to come within a week or two).

Caleb attempted to make a deal with Donny who was having no part of it. Still showing bitterness from the first week of nominations, Donny made it clear that Caleb will likely go up. Caleb made it worse on himself when he suggested Victoria not be his partner if he were to go up. I briefly wondered if that was reverse psychology, but then I remember who was saying it, so I squashed that idea.

Donny was happy to give Caleb exactly what he didn’t want at the nomination ceremony – A partnership with Victoria. Nicole on the other hand had her own payback to deal out with Zach. Last week during the nomination ceremony, Zach gave a pretty weird speech and ended up calling Nicole a ‘fruitloop dingus’. He has also been running around all week pretending to be the bad guy of the house, but Nicole is seeing right through that and called him out during her speech. She basically said he’s trying too hard to be Evil Dick and it’s failing.

The HoH’s tried to make things even putting a strong player up with a weak player so both had an equal chance of remaining HoH (would you expect any different from a Donny/Nicole HoH?). As previously mentioned, Caleb was on the block with Victoria, and Zach was placed up with Jocasta. Nobody was asked to throw it, and both Caleb and Zach were given two chances to save themselves this week (battle of block/veto). Again, would you expect any different from those two HoH’s?

The battle of the block competition was a punishment style format, where even if you win, you still lose (in the words of Victoria). Both teams had to arrange dominoes across a floor with a bunch of set punishment pieces they needed to connect to. They had to go through at least 3 of the punishments before they could test their domino arrangement. At this point I’m going to pretend I saw the end, but I didn’t due to CBS cutting off my DVR, but I do know what happened…

Caleb and Victoria won the competition but were given three punishments.  Adam and Eve (dress like Adam and Eve and be bound together for 48 hours), 2 week slop, and a shaved head (for one of the players). Midway through the competition you could tell who won because Caleb was talking into the diary room with a hat on. His head was clearly shaved under the hat, so that kind of gave it away.

There was talk of backdooring Frankie depending on the power of veto, so stay tuned to this blog to find out how that goes, or visit OK Magazine to see more of my recaps.

I blog stuff about Big Brother
Previous Big Brother 16 – Sunday Feeds
Next Zach – Should He Stay Or Should He Go?
Subscribe
Login
31 Comments
Newest
Oldest Most Voted
Inline Feedbacks
View all comments