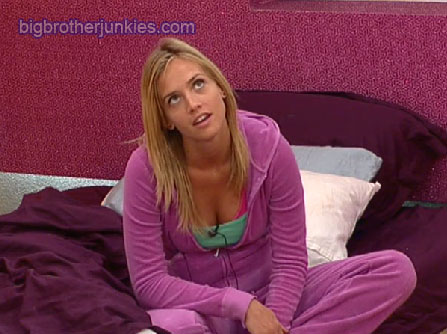 Now that the dust has settled from the Keith eviction, and the mystery surrounding the votes that allowed for Porsche to remain in the game, it was time to kick it up again today with the food challenge the the new nominations.

Spoilers after the jump…

This afternoon the food challenge took place, and it sounded like a pretty physical challenge as Rachel talked about puking and hurting her arm, and Brendon had some battle wounds as well.  I can’t wait to see this on CBS Sunday.

The results of the challenge:

Cassi and Shelly are back on slop for the 2nd week in a row, and are now joined by Adam and Dominic.  I don’t see how physical the challenge could have been if Kalia won, but perhaps she was carried by Brendon or something.

Next up, the news only got worse for Adam and Dominic as they found out they were nominated for eviction this week, and something tells me they’re not going to be dumb and throw the veto challenge, so I hope Jeff and Jordan are prepared for a battle.

This should be an interesting week in the house to see if Adam and Dom turn on each other, or they stay close until the last few days when they’ll no doubt start campaigning hard.  To keep up, make sure you’re watching the live feeds.

Speaking of the live feeds, after watching them for a bit tonight, I have a few notes….

— Is it bad that I want to see Dr Bookey hook up with Daniele while Rachel is outside working?  I mean wouldn’t that be some great Melrose Place type of shit?

— According to Shelly, Adam shouldn’t feel bad that Jordan put him up for a chance to lose Big Brother because she’s Jordan and I guess she’s the nicest person to ever enter the house.  I’m sure that will make him feel better when he’s back home watching her become a two time winner.

— Cassi and Shelly were going off on some position Rachel sat in that I guess would make God angry.   I’m guessing she sat there with her legs up in the air naked, right?  I mean the way they were describing it was that she was practically showing her ‘hoohoo’ to the world.

— Porsche on Cassi “I didn’t know skinny was in this season”. Things are getting feisty between the Big Brother girls this season.  I’m sensing a nice blowup between Cassi and Rachel then Cassi and Porsche in the upcoming weeks.   I hope I’m watching!