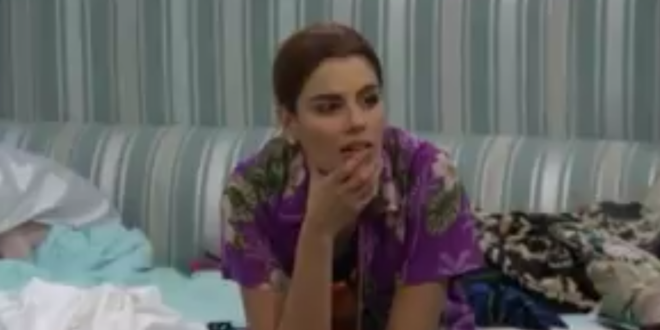 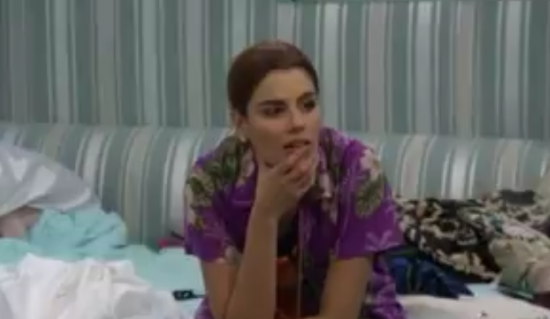 I don’t know what the comp was but I heard Marissa say something about putt putt or golf. Remember, she’s the person who said something to make me think she hit Omarosa with a bowling ball so I’m not putting too much stock into what she says. Ariadna is the new HoH. Brandi and Ari are excited and Omarosa got in on the action too. Omarosa’s new way of bonding is making Shannon the common enemy. She made a few comments to Brandi and Ari thinking she’s planting seeds. I saw her do the same thing with Marissa while they were waiting to play the HOH comp. She’s several steps behind on this one but it will be interesting to see if she tries to take credit at some point for turning everyone against Shannon. Ari and Brandi are including Omarosa in conversations but they’re aware of what she’s doing and don’t trust her. They would still rather work with her over Mark.  Ari had to go see the medic after the comp because she kept coughing. A couple of other house guess were doing it too. Omarosa will not be happy about anyone stealing her thunder! We know they replaced the air filters and I wonder if having a roof over the backyard is also somehow affecting air quality during comps. I heard Mark say they needed to fix it before next year so it’s definitely something being talked about. I’m curious to see how the comp plays out because it was mentioned that Ari had a harder time since she was directly in front of a fan. They also talked about Shannon’s comment during the comp when she was telling Ari “it’s not worth it.” They think Shannon was trying to get Ari to give up. There was also talk of Shannon being obvious with helping James during the comp. Brandi told Omarosa about the plan to backdoor Shannon and Omarosa did a good job of pretending she didn’t already know. (I don’t think Marissa gave her the details but she did know) It would be interesting if she told all this to Shannon and Shannon told her how hard Brandi was trying to get Omarosa evicted.

We found out Shannon was very upset over losing the veto comp. A lot was mentioned online about Shannon’s demeanor after the show ended last night. Some thought Keisha’s comments bothered her and others thought she may have caught on to the back door plan. She didn’t seem to care about the comment regarding James because he already knew but she kept wondering about Keisha saying “this isn’t an alliance” and asked people what they thought she meant by it. Shannon’s smart so I think she’ll know soon enough if she hasn’t caught on already. It would seem Shannon was just upset over losing the veto comp. Marissa complained to Omarosa about it and Omarosa said “why can’t she be happy for you?” (Ya, she’s trying to work Marissa) Omarosa told Marissa the reason she didn’t press her button on the last round of the veto comp was so Ross didn’t have to nominate someone else. I’m gonna call bullshit on that one! Shannon may be one of those people who view another person’s win as only because she lost, not because they won. Don’t get me wrong, I like how competitive she is but that’s never a good look. I’m going to withhold judgement for now because Omarosa twists everything and Marissa may be looking for a way to ease her guilt over wanting to evict one of her friends. They aren’t the best sources of determining Shannon’s behavior and motives.

Metta did some dancing in the storage room and in the shower. He’s very happy with the HOH results. I think what started as the truth could turn into an accidental strategy. He’s aware of it too because he said that they all think he wants to go home but he wants to stay and play. He keeps making comments about wanting revenge because they wouldn’t send him home but I think that’s all talk at this point. He did some terrible rapping in the shower while trying to entertain the cameras but he almost fell and that was funny.

Ari told Ross that she isn’t getting rid of Omarosa and doesn’t see her as a threat. Ross is on board to back door Shannon. (now that it’s someone else’s HOH)  If it isn’t Shannon, I think he would want it to be Omorosa but Ari let him know, it won’t be Omarosa or Metta. Initially, Ross wanted to sleep upstairs to keep an eye on things but I don’t think he did.  Ross and Marissa wasted no time deciding what Ari should do and they think Omarosa and Metta should go otb and then back door Shannon.  At first, Brandi was suggesting putting James up against someone and back door Shannon. She didn’t realize that Shannon couldn’t go otb if she won the veto. Ari’s initial thought was to put up James and Shannon together so one of them would for sure go home. If that’s who they’re after, I think it’s the best plan. The one left is going to gun for you afterwards anyway so what does it matter if you go ahead and put them up. At least that way, they can’t work together. It doesn’t matter because they’ve all switch they’re thinking more than once already.

Brandi is aware of what Ross is doing. She told Marissa yesterday that Ross needed to pick a side and stop playing both. When Marissa agreed, Brandi let her know that Marissa was doing the same thing. I may not like Brandi but let’s face it, she isn’t boring. Ross made a comment about getting back on track, said they had to make a pit stop on the humanity highway when they evicted Keshia. Haha

Ross wants to have a group dinner the night before each eviction and said it was the last time they would all be together.

Metta was very surprised to learn “the guy singing in the first comp” was a finalist twice.

I keep reading comments online from people saying that it’s too soon to make a move.  It isn’t too soon because it’s such a short season. I’m almost thinking a lot of BB fans have become brainwashed over the years. We’ve seen so much voting with the house and “it’s too soon” talk for so many seasons that people freak out when the hg’s actually play the game.

Steve should be back soon if he isn’t already. You guys will get to have some updates that aren’t as all over the place as Marissa’s conversations. Have a great day!