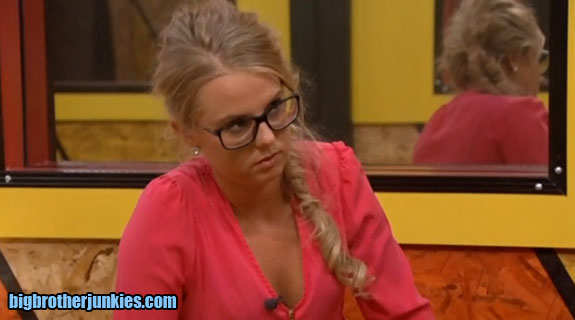 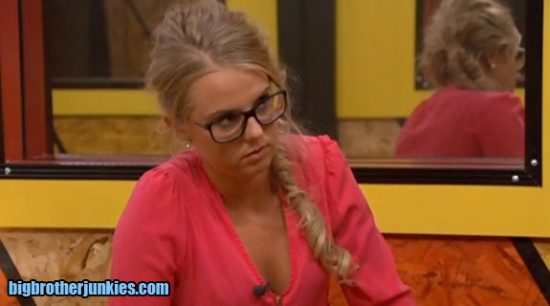 The first two HoH competitions were dominated by original members of the “Bomb Squad”. Caleb/Frankie won week 1 and Devin/Amber won week 2. Frankie was already preparing the HoH bed for Caleb’s win again this week, but something strange happened.. he didn’t win. In fact, there is only one person in the ‘Bomb Squad’ who has a chance to win HoH this week, and that guy is far more committed to his Team America role than that silly alliance. Derrick finished second in the HoH competition behind only Nicole, and the two will enjoy the suite, for now.  Nominations and battle of the block will likely be done by tomorrow evening, so we’ll know who actually gets to keep the room then.

Before the HoH competition, we were finally able to see the much anticipated highlights from the PoV meeting they teased us with last night. As soon as the meeting ended, Brittany stood up to further explain herself and why she slammed Paola during the meeting.  Britt blamed Paola for throwing the competition (which put her in that spot to begin with) and said it felt like a knife in the back. Paola stood up and decided to slam Devin a bit on how he’s acted this season, but both were nothing compared to Zach’s.

Zach took the floor and stood next to Devin, and went off on nearly every person in the house. However, most of his wrath was aimed at the man he stood next to. Bashing his fake smile, his fake tears, he medication usage (not aired on CBS), among many other things, he slammed Devin pretty bad. This is where I defend Devin, mostly based on how so many describe him as a monster.  As he stood there and took the verbal abuse from Zach, he smiled it off, didn’t say anything bad, didn’t flip out (like a Willie Hantz), and let Zach say his piece. Look, I don’t know Devin personally, but after watching that episode tonight, any reports of his aggression and anger are grossly exaggerated.

Despite Zach going off on everyone, Derrick worked quite a bit of magic this week in securing him the votes to stay. Paola would have easily walked out the door had Zach just kept his mouth shut, but the meeting stirred up the pot and nearly secure Paola the votes needed to stay. Fortunately for Zach, he had Derrick campaigning for him, and that was all he needed. Zach locked down all but 2 votes and Paola become the second member evicted from the Big Brother 16 house.

As I mentioned above, Nicole and Derrick ended up winning the HoH, and we will find out soon who actually is able to keep the title for the week.

In another news, just before the show ended, Julie Chen told us the house will now be wearing wristbands to monitor their daily activity. It sounded a lot creepier than it actually is. In reality, it’s a health tool called fitbit where we can see how many steps they took or how many calories they burned each day.  To check the latest stats, check it out here.

To get more Big Brother coverage, be sure to visit our friends at OK! Magazine!