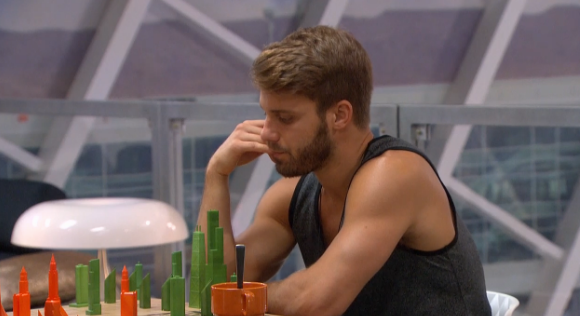 This doesn't mean he won. Just an image because, why not?

Seeing as I spent the better part of yesterday staring at the Big Brother fish tank, I thought I’d try something new today and actually step away from my computer. I figured the entire day inside the house would be them sitting around waiting for the veto competition to begin, and that’s pretty much how it went.  Moving forward, I may do that for the next few weeks, and by that I mean taking Saturday afternoons off (with the exception of probably a weekly roundup post) while the veto competition is underway.  Do you guys care about my personal life?  No. But, I just wanted you to know so you don’t spend the day wondering when my live update thread will begin.

With that out of the way, as of the time writing this (5:00pm pst), they are still playing the veto competition. However, the reality is that it almost doesn’t matter who wins today, and that is because Da’Vonne and Zaki were selected to be the other two players to play. This means the only ways Victor does not get evicted this week is if he suddenly gains a personality and intelligence, or if Tiffany wins the veto, and refuses to trust people in the house. The latter is far more likely to happen, but both are longs shots at best. For drama purposes, I am hoping Tiffany wins the veto simply because I want to see some sort of craziness over the next few days, but I wouldn’t hold your breath.

I’ll post feed updates every hour or so until the feeds return and we see which person will likely be removed from the block in exchange for Victor (blogging is real difficult when the house is predictable!)

Ok, this day is in the books. Overnight in the morning!