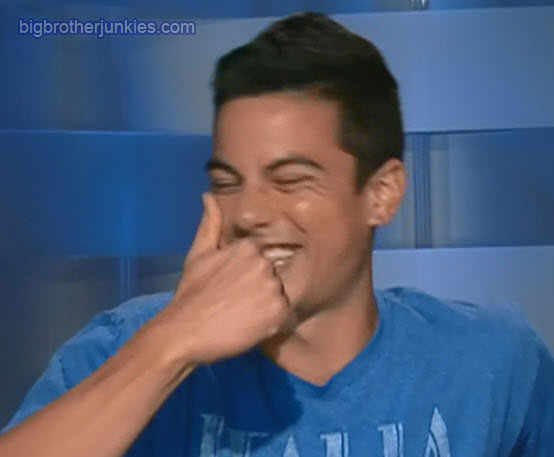 The Rachel Hour Continues As Nominations Are Announced

With the premise this season, Big Brother has pretty much painted themselves into a corner with the way the game is right now.   There are 11 people in the house, 3 have keys which eliminate them from competitions, and (Daniele aside) have used the house as a summer vacation spot since acquiring those keys.  The veteran pairs are forced to partner together, and the partnership of Kalia and Lawon make the slowskys look like world class athletes.  This leaves the game currently Jeff, Jordan, Rachel and Brendon against Adam and Dominic.

Because both Adam and Dominic decided to cut their own deals with Rachel after a nice ass kissing session, tonight’s episode was extremely drawn out featuring roughly 10 straight minutes of back and forth between the super love birds fighting (shocker) and Jeff and Jordan watching the show Same Name.   I honestly felt bad for the editors who had to put this show together this week, as their primary source of entertainment was those two fighting….btw, did you know THEY’RE ENGAGED???  (Give credit to Jeff for having some funny DR clips this season)

Jeff and Jordan were watching the show up there with Kalia and Shelly because somewhere deep down in Jordan’s strange mind, she was able to see three bars of soap and opera glasses and get the clue “Baywatch”.   She is like Chumlee from Pawn Stars who acts like tying her shoes is one of the hardest things in the world to do, but then suddenly spits out some genius shit that leaves you baffled.   I bet Jordan would clean up at a blackjack table but then forget where she parked her car.

Jordan decided to pick Kalia and Shelly because, well, I don’t really know.   You see stuff like this in Survivor all the time where the winner picks people you’d never expect so they can a) keep their allies in camp to prevent mutiny while they’re gone and b) schmooze the people they picked trying to secure new allies.   She very well could have been keeping Kalia and Shelly close to her, knowing she’d already close with Brendon and Rachel… but… this is Jordan we’re talking about.  She could have picked Kalia and Shelly because she liked their outfits.

This didn’t sit well with the girl who brags about winning every HoH challenge she is in,  so she went off to pout.  I guess the massive ass kissing that comes with winning the HoH has really gone to Rachel’s head because in most social type of reality games, Jordan’s picks were actually the right move.   This didn’t stop Rachel from crying about it, but why would it?

After the very painful-to-watch segment of Rachel and Brendon fighting, it was time to mercifully put this episode to rest by doing the obvious, putting Adam and Dominic back on the block for “strategic” reasons (ie, too scared to put Jeff and Jordan up).

Overall, not one of their best episodes they’ve had in recent memory, and I really hope it gets a lot better once teams are split up because it’s becoming painful to watch the CBS versions right now.   Live feeds are far more entertaining because you can choose a different feed if you see Brendon and Rachel fighting yet again, and they’re free for 3 days so pick them up here!