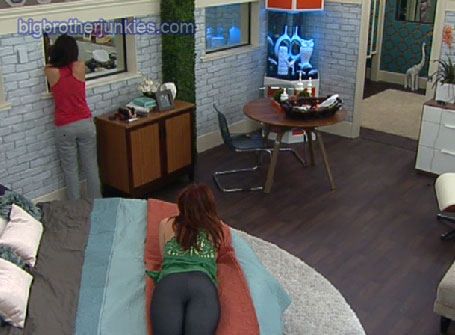 Just kidding, there is no way I’d torture you guys doing a transcript of Rachel reading to Daniele while she puts on her makeup (that must be fun for her), but I’m bored for a bit so I’m going to do a live blog which will likely involve some spoilers after the jump…

11:20 AM – Adam having a long talk with Keith about how he basically has to accept that he’s going to remain on the block after the veto ceremony because pulling him off will keep him safe, but the vets know in the long run they will have made an enemy by making him go through that for a week.  That’s probably the reason the HOH rarely changes their decision if they win veto too.

In the meantime, Brendon, Jeff and Porsche are outside trying to figure out why Keith lied about his occupation (as a “matchmaker”).   I have an answer, it’s because Keith thinks higher of his position than other people do.  Read the guys profile, he calls people Human Capital.  Who does that?

11:24 AM – Porsche said she couldn’t date Keith because he’s black and her father (from Michigan) wouldn’t approve.  Naturally, Jeff and Brendon are making fun of her for that.

11:31 AM – Jordan and Kalia talking about Keith in the HOH room.   Keith is one popular guy this Sunday morning.  I’ll be shocked if he somehow survives eviction

11:36 AM – Kalia throwing Cassi under the bus saying she has a good chance to be a floater going deep into the game.   Also said she’d probably put Dom on the block if she won HOH.  Good thing the original 8 are sticking together.   Noobs.

—- And it looks like there is a break in the action, likely for the veto ceremony.  That was a quick live blog —-