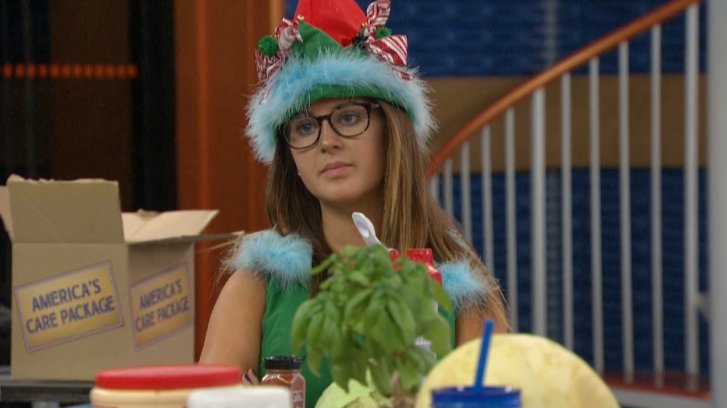 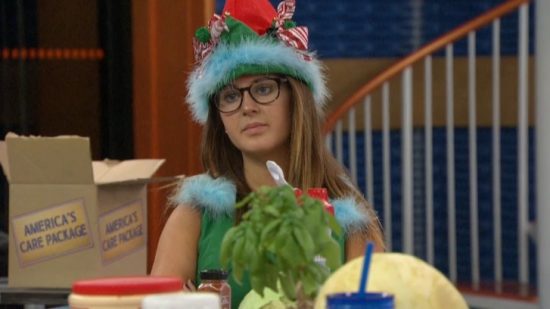 Good evening, everyone. It’s Saturday night, and what’s better than staying in and watching the feeds!  I just realized I forgot to update the header, so if you’re wondering about the veto results, here they are …

Nicole won the Power of Veto

It was a hold/fold counting competition, with an obvious Christmas theme. Between the care package and the theme of the veto, the guy CBS is trying to shove down our throats will be getting a lot of airtime this week (Corey). They really want us to like him, and I guess it’s working because he did get the package over Paul or Victor. I honestly thought people would forget he was even in the house while they were voting.

If you missed it earlier, Nicole and Corey had a fun discussion on the meaning of his power this week.  By fun I mean frustrating and I wanted to stab my ears out. I swear those two are perfect for each other.

Enough rambling, here are some updates:

12:00am – I have a feeling the blogs this week will be shorter than they’ve been all season.  With just two small groups split up having casual conversation all week, they are going to run out of conversation. They’re already pretty much out of game talk until at least Monday when the noms remain the same and reality kicks in for Michelle that she really could be leaving.  Her little group may try to scheme, but they’re going to have to come up with something better than what they did with Paulie.

It’s not impossible, especially considering the trump card they’re holding – the strength of the groups. Nicole and Corey are smart enough (even though they may not act it) to know that taking Paul and Victor to the final 4 is the harder path to follow. Whether or not Michelle and James will be able to make them see that is the question.  That is unless Michelle is too proud to actually ‘kiss ass’ (ie game talk) with Nicole rather than her normal strategy of just making the other person appear worse.  Paul already make the preemptive strike in that area by telling Nicole that Michelle is going to try to bait him into an argument all week. This means even if he does snap back at her, he can just say “see, she kept pushing and pushing”.

This week may be slow and boring, but interesting to watch to see how it plays out. Kind of like Fear the Walking Dead every week.