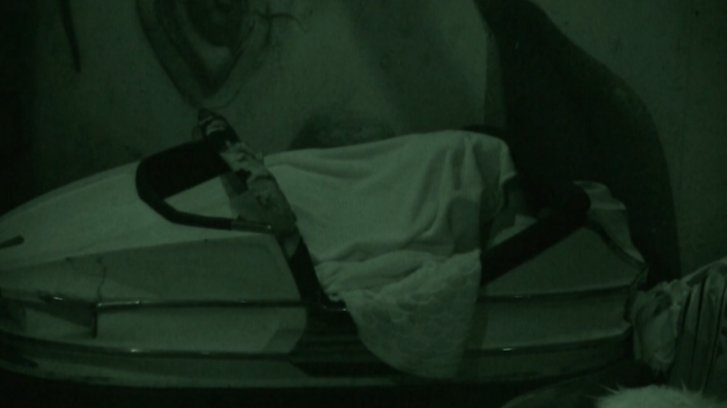 Good afternoon, everyone! The weekend may almost be over, but the fun never ends in the Big Brother house! Sorry, that is something I need to repeat to myself during the slow weeks to keep myself sane.

There really isn’t much going on, but to be fair, that is pretty much expected this late in the season. When there are 7 people in the house, with 6 of them being paired up pretty much all season, things get stale. Conversations get repetitive, and gametalk grinds to a halt. It’s like when you go to a mixed-family kids birthday party and you have small pockets of adults spread apart talking about the same stuff they’ve been talking about the past few birthday parties (or maybe that’s just the birthday parties I end up at?).

Right now the direction of the week is that those 6 people are going to boot out the awkward 7th person who ends up a 3rd wheel on any conversation going on. That 3rd wheel is usually me, so I can relate to Michelle’s pain. Again, that’s probably why we’re such best friends now.

Is it smart for Nicole to get out Michelle over say Victor or Paul?  Honestly at this point, it’s hard to tell. Michelle did call Nicole a snake on national TV, so it would be hard to fully feel safe while she’s in the house. Be that as it may, I think most people would agree that Vic/Paul are a pretty dangerous duo and every wasted chance to split them up is a risk simply because you never know if you’ll get that chance again. They will be 1/3rd of the house after Thursday, and are guaranteed to both play in every PoV comp. At this point in the season, veto holds more power than HOH because it’s guaranteed safety for you and possibly a partner (unless you’re forced to save yourself).

Not like any of it matters.  Regardless of what has happened, Nicole keeps pushing herself into a Britney Haynes 2.0 role. Her refusal to work with girls game is about as strong as Michelle’s stubborn pride game.

Ok, here are some updates:

Note – If you’re wondering, we’re still looking for writers for this season, the fall season and moving forward.  We want to keep pushing content, so reach out to us if you want to share your Big Brother opinions!