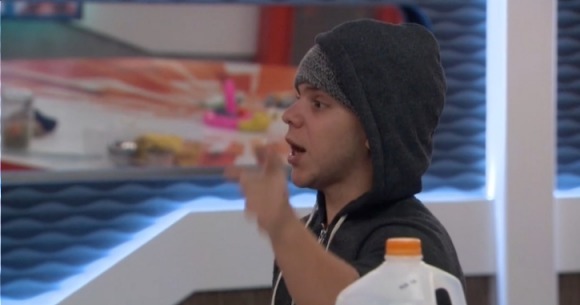 Good morning all you BB Junkies! I hope your week started off better than it did for the Hive alliance. Yesterday was the day for them to start working on those votes after the veto ceremony when Tyler took Angela off the block. The Hive needed to divide and conquer and focus on why Rockstar should stay over Kaycee. Is that what happened? Nope. They did the same thing they did when Tyler won the veto and they were waiting to see what he’d do with it. They isolated themselves in the hoh room and trash talked the other side of the house. I’m exaggerating a little because Haleigh did flirt with Brett to secure his vote. Rockstar had a few talks to tell everyone that Angela (who isn’t otb against her) was a spoiled, privileged, princess, b*tch but for the most part, they hung out together and talked about how badly the other side of the house is playing.

The people in Hive simply don’t have the patience, willpower or strategic brains to do what Level 6 has been doing. They’ve had a divide and conquer mentality all season. The first part of the season, Tyler worked the other side, Brett flirted with Haleigh and Kaycee built a bond with Bayleigh. Of course, we all know what Tyler accomplished with Kaitlyn and all these things were planned and discussed. Tyler built something with Scottie and has had JC thinking they’re a duo the entire time. Tyler and Kaycee also have a special bond and a trio with Sam. Tyler did such a good job convincing the hoh (Bayleigh) that Scottie was his best friend,  Scottie started believing it. When it became obvious that Tyler and Angela were working together, (well it should’ve been obvious) Brett and Tyler simply traded places. Brett became the guy who was alone in the game. Brett spent time alone just like Kaycee is doing now. They’ve all taken on roles to play and they’ve played them.  Angela has done the least to make friends and infiltrate the other side but she’s won an hoh that Kaycee and Brett haven’t and taken out a player with a power app. She also had to do some acting that week to accomplish it so Bayleigh wouldn’t use her app.

This group gets up every day and goes to work. Yes, Angela stays horizontal A LOT but she does her part and they all seem to understand they need to ‘work hard for the money.’ (I haven’t given you a song to get stuck in your head lately so there ya go, you’re welcome) I really don’t enjoy picking sides but this year, how can I avoid it? I’ve said over and over that I love ALL this cast and I still do. They all give me something even if just some laughs and entertainment. Some people have criticized the season and said it’s like watching Paul control the house last year. I don’t know what they’re watching because it isn’t anything like that. He was one guy who was handed a huge advantage at the start and was a returning player. Tyler’s earned everything he’s had except the power app and it hasn’t been used yet so it hasn’t benefited him.  He also isn’t the only one putting in work. I don’t see the season as a ‘steamroll season’ just because one side is getting wiped out. One side isn’t winning everything.  If you lump Sam in with L6 and Scottie with Hive, Hive has won 4 of the 7 hoh’s. Sams power app benefited (or could have) a Hive/Foutte member and the other 2 haven’t been used. The hacker wins were split between sides so the twists and comps have been even. They’re just being outplayed and for people who think it’s boring to watch, I’d suggest you watch seasons 16 and 19 on repeat to get your tv enjoyment. Double vetos and Pandoras boxes haven’t been dropped in to help players who are making bad decisions…yet. Instead, what we’re watching is more like old school BB and in old school BB, bad players go home.

I was trying to remember the last season we saw an alliance work this well together and I’m not sure who to compare them to. Maybe the brigade in BB12? The house is divided like it was in BB6 but they didn’t infiltrate the other side in that season, they just openly hated each other. Don’t get me wrong, I’ll probably enjoy it if Fessy manages to win the next hoh because he’ll be the only person playing for his side (maybe Scottie but not sure about that) so if he beats the odds, good for him. I’ll also enjoy it if L6 finishes wiping out the Hive too because they’re a mess and just bad players.

At this point, I think L6 could wear matching team uniforms and Hive would still wonder who (from their own side) flipped. They’d still think no one talks game except themselves.  Some of the talk from last night shows it so let’s recap some of the conversations from yesterday:

I forgot this from the night before but Sam was alone in the kitchen at night having some chocolate milk. Hay said over the hoh monitor to Sam that she could come upstairs and drink it if she wanted. Sam was visibly uncomfortable and said “No, absolutely not.” She got up and went to the storage room to finish her drink. It was really funny. I don’t think this was a freak out moment from Sam. I just think it bothered her to think Haleigh was spying on her from the hoh room. Haleigh was simply being nice when she saw Sam alone.

I also forgot to mention from the night before Angela telling Tyler about her experiences growing up doing gymnastics. It was sad to hear how hard they are on many of the little girls and the eating disorders and psychological problems it can cause. She talked about how lonely being a college athelete can be too and how hard it is because you’re basically working a full time job. My son played ball in college and she’s telling the truth.  It’s too bad Rockstar couldn’t have heard some of it since she’s so sure Angela’s life has only been privileged and perfect. I hope Steve can offer you more substance today because last night was pretty dull.