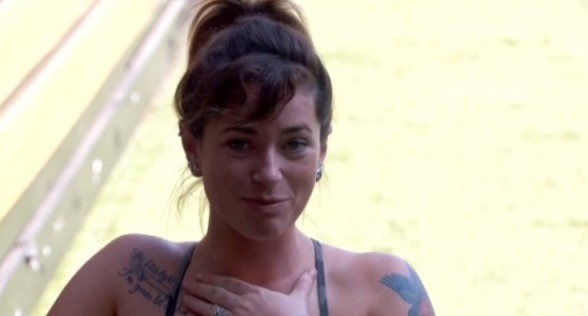 Sunday Sunday Sunday! The backyard is open and now everyone wants to spend some time with Fessy as he has to decide who the replacement nominee will be tomorrow when Brett takes himself off the block.

Well, everyone but Brett. Brett wants to tell Fessy to suck his dick during the PoV meeting because Fessy said he wouldn’t put him up at some point this summer.

One thing is certain – No matter what he decides, level 6 is safe for another week. Between Haleigh winning the hacker and taking a shot, then winning HoH, and now Fessy winning HoH, there is no way that level 4 (now) should still be together, but here we are. When you factor in Sam’s pretend marriage with Brett, that makes it back to level 5 with only 8 people remaining in the house after this week.

Since the beginning of the game, I knew Tyler had a shot at winning, but I really thought his game was going to catch up with him. As we’re down to the final 8, I’m not really sure that is going to happen. One of the worst things that could happen to him would be that he use the cloud app tomorrow which should put some rift between his alliance (mostly between him and Angela). They’ll play it off like they understand why he kept it a secret but they’ll really be bothered by it deep down. Angela has been growing closer and closer to him to the point of the beginning stages of a showmance and for her to find out he had some secret power app – well, that won’t be good. The best thing for Tyler at this point is just to not use it. It’s a pretty shitty app, anyway. It’s not like he’d leave the house with a power to secretly nominate two people or anything. His power is ridiculously dumb. I actually wonder if it would have benefited him more to use the power as a weapon than a tool. Basically like a hidden immunity idol in Survivor where people think twice about nominating you because they just assume you’ll use the cloud app.

Anyway, Sam is giving Fessy one of her nice long talking-tos so I’m going to jump in on that

Before I begin, I want to thank everyone for donating this season. You guys are absolutely amazing. Now that the server costs for this site are paid, all donations from the past few weeks have been split with Mel!

I am going to step away and close this thread.  I’ll create a new post after the CBS episode and hopefully there will be a lot to cover when Haleigh finally learns what Sam was saying about her this morning!  Check back soon