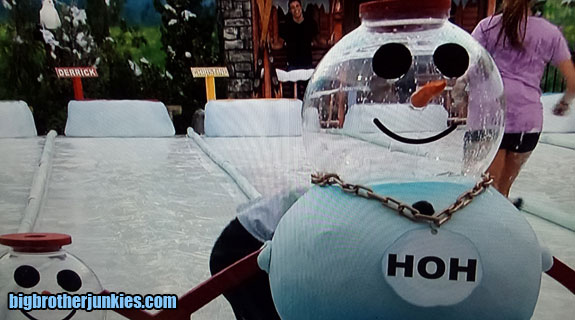 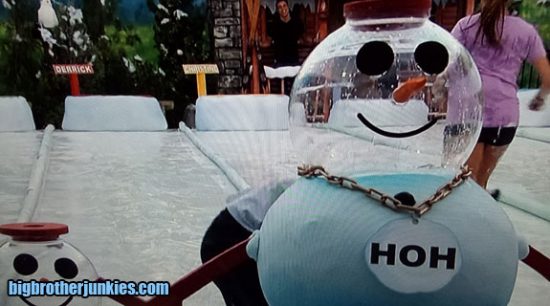 As Derrick put it while casting his vote: All good things must come to an end. The statement was very true tonight as one of the most genuine reality show contestants I have seen in a long time was finally evicted from the Big Brother house. Donny Thompson may not go down as the best Big Brother player in history, but he’ll likely be always known as the nicest.

Before I talk about his eviction, I want to talk about what could have (and should have) saved him – Team America. They were given a mission this week to choose what they want to do, and America will vote on whether or not it was worth $5k.  Donny ‘got it’ right away and knew keeping Donny safe would have been a suitable mission, and told his fellow allies. Frankie shot it down and decided to throw a play instead. For the first time this season, Team America was told whether or not they passed or failed a mission, and it was done by Julie Chen live.

One of the cards this week said Julie Chen was going to ask one of Team America what they would want to have for havenot food. The person was to reply ‘Apple Pie’ and she would either say yes or no. As the votes were live, I was receiving a lot of replies on what people were voting, and most were ‘No’… well, I was not at all surprised when Julie Chen asked Frankie and replied with ‘An overwhelming no’ for an answer.  I bet that stung because he knew not only did they fail at the mission, but it was a massive failure. Keeping Donny would have won it (and likely won them apple pie for the week).

The 24 hours prior to eviction, Frankie did make a push to actually keep Donny, and for about an hour it actually seemed like he had a chance, but it was too little too late for Team America, and Donny was evicted with yet another unanimous vote.  While speaking with Julie Chen, Donny just said he was heartbroken and disappointed at Team America (especially considering they could have kept him. They had the votes). Showing class until the very end, Donny then said he didn’t blame then because they were just looking out for their individual games.  Julie then informed him that the soap opera The Bold and the Beautiful want Donny to have a guest appearance.  I don’t think he knew what that was, but seemed happy.

The HoH competition was an endurance challenge where players had to run up and down a slippery path with a small bucket of water to fill a jug on top of a snowman. They did have the option to fill a smaller jug that gave them $5k and a ‘punishment’ as well, but most started right in on the HoH.  To find out who won the HoH challenge, browse around the site or tune in to the episode Sunday night where they will display all the highlights from tonight’s HoH competition.

I’ll give you a hint – Victoria didn’t win.

Read more of my Big Brother recaps at OK! Magazine