Keesha
Evicted
Home / Big Brother 18 / Tiffany Does Nothing – Saves Herself 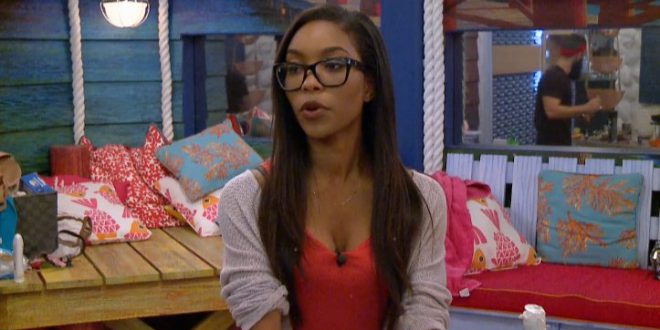 Tiffany Does Nothing – Saves Herself

(edit: I forgot to mention that I’m still looking for a writer. Contact me for details.  Must know wordpress and watch the feeds)

If there ever was a time to get by on family reputation alone, this would be it. Tiffany (aka Vanessa 2.0, or V2) was the target throughout the week, but was under the impression that she was safe, so she did little campaigning. Despite the lack of campaigning, she went from definitely gone, to almost saved, back to definitely gone, finally to be saved one more time; All without her knowledge of what was going on. It was pretty impressive, yet sad at the same time.

This all happened because Da’Vonne (and the rest of the house) has been getting really sick of Frank over the last week. While many in the house haven’t been huge fans of Tiffany and her unstable gameplay, it was Frank driving the force to get her out. With the decline of Frank’s standing in the house exposed that fact, and it certainly wasn’t lost on people like Da’Vonne.  She certainly wasn’t about to sit around and do Frank’s bidding, and tried to change the outcome of the week. In addition to saving V2, Day’s plan was to use her against Frank moving forward until he’s out of the house. Of course she glosses over the fact they’ll still have to get V2 out at some point as well, but I guess they’ll worry about that when she is HoH and pegging off the vets.

Da’Vonne coached V2 into being more human, while simultaneously dropping hints in the ears of people like Paulie and Nicole. Her actual attempt was going well until it hit Paulie, who decided it was a foolish move to keep a stronger player in the house, while also making an obvious signal to Frank that he’s not as safe as he thought.  He shot down the idea and convinced the rest of the house to just stay the course and vote out V2. Additionally, Day’s coaching backfired as well. Instead of being smart and social, V2 decided to clean the house and the follow people around all day casually asking what they were going to do tomorrow (today). This annoyed Paulie and Corey further and they wanted to just wash their hands of that situation.

Tiffany gone, right? Wrong. While all this was going on, Bronte was running her mouth about her she still wants to target the boys and word got back to Paulie. This caused the final reversal that would eventually get V2 the votes she needs to remain in the house. Throwing caution into the wind with Frank, Paulie simply didn’t want to risk Bronte winning HoH and targeting him and Corey, Z, or another ally.  After a quick discussion, Bronte went from safe to likely evicted tonight by a potential overwhelming number. I am guessing a vote of 6-3, with her only votes being James, Natalie and Frank.

While I can see both sides to the argument, there are basically two sides to Paulie+Crew’s plan…

a) Vote out Tiffany. This keeps the plan in motion, and Frank in the dark. It makes him easier to beat for HoH, and easier to backdoor. Does it guarantee an eviction? No, but it makes it easier

b) Vote out Bronte. This shakes Natalie, and makes Frank realize he’s not safe. It removes the very short term threat of Bronte, but fires up Frank, and they’re still going to have to worry about Tiffany later

c) Vote out Paul. This keeps Bronte and Tiffany in the house, and it shows the house isn’t working with Frank. Not a good plan from any angle.

In a sense, he’s choosing to trade Tiffany and about an 85% chance of Frank eviction for a Bronte eviction. It’s not a trade I would make, but I also understand the paranoia when you hear rumors about someone directly mention your name as a target. Bronte did that, and that made her the target.

What do you expect to see happen tonight?