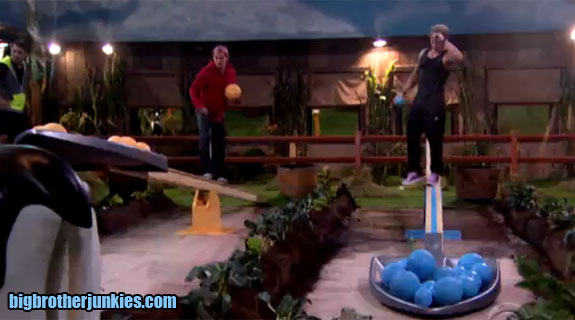 Here We Go Again – Time To Replay The Week 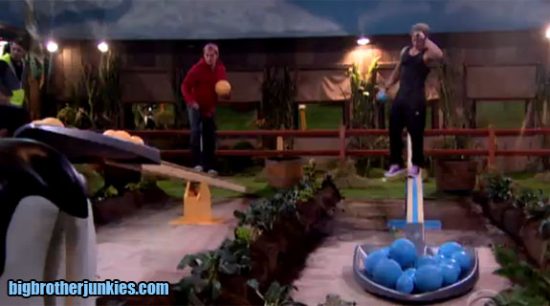 The week that never was is finally over, and we get to watch that week play out again, likely as it did the previous week.  Confused?  Don’t be.  It’s just another in a long line of Big Brother twists that had good intentions but was executed very poorly.

Last Thursday night, Julie introduced the golden button in the havenot room, and if pressed, the house would have play the week over.  By play the week over, that’s exactly what they mean from Cody being forced to wear the dinosaur outfit to competing in the same exact challenges as the prior week.  Allowing the same people to play in the same competitions in back to back weeks is pretty unheard of, and considering both competitions are far more skill/intelligence based than typical Big Brother competitions, the fairness level is in question.

The Head of Household competition was exactly the same as last week where players had to cross a beam and make sure their balls didn’t fall out of the shovel. This is the kind of competition that requires dexterity and skill. Allowing the house to essentially ‘warm up’ last week made the competition that much easier as they knew the ins and outs of the shovel. How to stack, how fast to go, etc.  Even the houseguests later remarked that it sounded like Julie wasn’t quite expecting them to move as quick as they did, as near the end of the episode, every houseguest already had about half of their shovels full.

Frankie won last Wednesday, but that was due to a last second error by Caleb. Until that point, they were fairly close in the competition and it could have gone either way.  The feeds returned and (spoilers alert) Caleb won the HoH this week.  The only surprising part is Cody appeared to be Caleb’s biggest competition this time around, but it sounds like that wasn’t even really that close after Cody dropped his balls.

Needless to say, this has been a disaster week for Frankie.  He won two competitions and nearly secured himself a spot in the final 4 all while exposing what a big threat he is by winning those two. Now, his two nominees are still in the house, he no longer has power and could possibly go to jury at the next eviction.  I don’t think he will, but it could happen. Stranger things have happened in Big Brother – just not this season.

This will be my final recap for OK! Magazine until after my honeymoon, but keep checking back on the site for spoiler updates on what happens.   For more of my episode recaps, check out OK! Magazine here