Teddi
Evicted
Home » Behind The Scenes » My Trip To LA

My Trip To LA 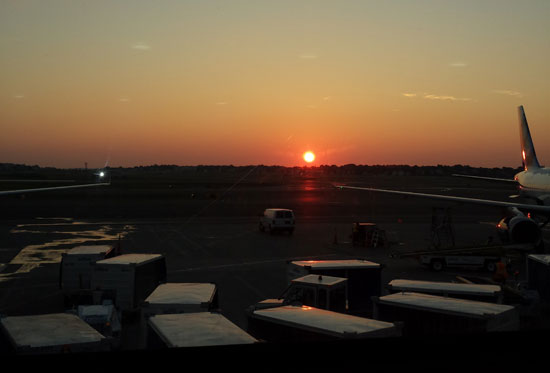 Note, this is going to be both Big Brother related and personal experience related.  I know many wanted to hear about my entire trip. I will create a new post after this going into detail my actual Big Brother 17 taping experience. So, if you’re only interested in that, hang tight and skip this point.

I also want to send a huge thank you to CBS for this wonderful experience. They really know how to treat someone when you win a contest with them.

(for my actual experience in the studio, follow this link)

We were set to fly out on Wednesday morning at 7:30am, so technically Day 1 begins on Wednesday, but for me it actually began on Tuesday simply because I pulled an all-nighter due to a combination of fear, excitement and knowing there is no way I could wake up at 4am. But, nobody cares what I did on Tuesday – heck, I don’t even care – so I’ll skip that.

Bright and early on Wednesday, we arrived at Logan Airport in Boston. They said to get there 2 hours in advance, and that’s just what we did (and I figured out why they say that on the flight home – more on that later). It was quite a beautiful sight to see the sunrise like that, and while it wasn’t truly over the ocean (thanks to some stupid town that sticks out between airport and ocean), it was still a very nice sight.  Nerves were in high gear, but after checking in and dealing with TSA, there was no turning back now, so I accepted I’m actually going to fly for the first time in my life.

We took Jetblue Airlines, and I don’t know about any other airlines, but I will say this. If you’re flying coach and Jetblue is not much more than others – choose Jetblue. Other than first class, this was probably the best I could have asked for as they supplied free drinks / snacks. And their in-flight wifi was actually really decent. I saw the lady next to me streaming Netflix. There is an option to pay for premium wifi, but it doesn’t even seem you really need that. I won’t talk too much about the flight because it would be a very boring conversation. 6 hours of sitting there isn’t exciting. But, almost no turbulence made for a very smooth flight into LA.

The flight landed at LAX, and as we were about to pick up the bag, I noticed the guy standing there with my name on it.  Yes – first class!

As we stepped out of the airport, my first thought was – Oh wow, this really DOES look a lot like GTA5. Yes, I play too many video games, but I just thought it was amazing to see how the roads were all similar, the building looked the same. I almost felt like I could just punch someone in the face and take their money, their car, and run over them 5x before casually driving away like nothing happened.

We stayed at the Hilton Universal, which was right next to Universal Studios. I was a bit sad not to see Paris Hilton standing at the door greeting people, but I’ll just assume she was at another Hilton doing that. I mean, that is what she does with her life, right?

Our room was absolutely beautiful. We were put up on the 11th floor with huge windows that overlooked the valley

And best of all, we were literally right across the street from Vivid Entertainment. If you’re a Teen Mom fan (and many did come here from my Teen Mom blog), that is the company that produces all those cheesy ‘leaked’ celebrity tapes. I was half expecting to see Farrah standing outside, but couldn’t wait all day watching.

We took a quick trip to the free part of Universal Studios called citywalk. It’s an outdoor mall that features all types of stores, gift shops, and restaurants.  Our lunch was at Wolfgang Puck’s, and it was my first taste of the west coast style food.  Like Paris, I assume Wolfgang was off greeting people at another one of his places, so we didn’t run into him, either. Bummer.

Back at the hotel, we grabbed a rental car because I had this huge plan mapped out, and didn’t want to rely on tours or public transportation. It was a good thing, because by the time we were all done, the tours were shut down for the day and I’d have no clue how to get from the beach to my hotel using a bus.

Our first stop was at the Hollywood Walk of Fame. This was an experience I don’t even know if I can put into words.  I’ve been to Times Square, and obviously been around Boston quite a bit, but this was just so crazy with people dressed up as characters walking the streets. Others giving me CD’s telling me they’re going to be famous and then demanding a donation. And a lot of tourists. I mean, a lot.

After hitting up a few gift shops, taking a fairly subpar photo of the Hollywood sign, we got to run into Jules from Pulp Fiction. Look, a lot of these street performers were mediocre at best (Ariel, for example, looked bored out of her mind), this guy was the real deal. He could have filled in for Samuel L Jackson if they needed.  I got a picture with him, and it was the highlight of my day so far (picture is on wife’s phone. Mine died by this point).

It was time to head back to the car and make my way down to Santa Monica Pier, but I had to make a few quick pit stops. First, the Beverly Hills sign. Just cruising down one of the streets, I saw it, and immediately pulled over without caring about parking.  We jumped out, took some quick snaps in front of the sign, and it was back on the road (again, pics on her phone).

Before our final destination of the beach, we had to hit up Rodeo Drive. While I am far too poor to even window shop at that area, it was absolutely amazing to see the beautiful cars, and crazy rich people casually walking around blowing money on whatever the hell they wanted. I think in that 10 minute span, I saw two Rolls Royce’s, a Ferrari, and a Maserati. Not counting the endless amount of smaller luxury cars like Mercedes, BMW, etc.

Finally, it was off the to the Pier. After driving around the area for like 20 minutes looking for parking that wasn’t charging for a complete day (when we were only going to be there an hour), we found a spot a block away. Pointless part of the story, so I’ll continue. As we approached the pier, the sheer amount of people standing around on it was shocking to me. I live near a beach, and if we had that many people at the center of the beach strip, there would be traffic for days.

After all my rambling about Day 1, a few things happened at the beach. First, I stuck my feet in the Pacific Ocean.  As an Atlantic Ocean guy, that was wild. And finally this… 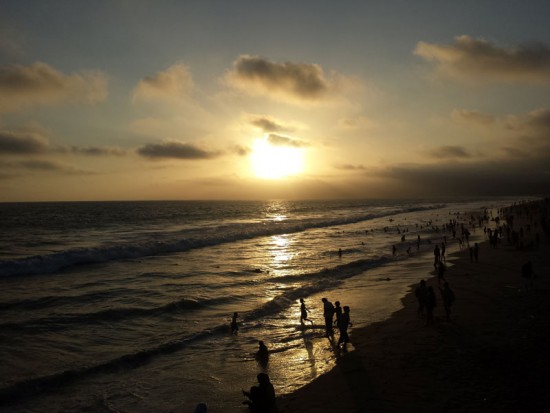 My wife and I got to watch the sun rise on one coast of the country, and on the very same day we managed to catch it set on the other side. It dawned on me when it actually happened, but that was something that doesn’t get to happen very often to very many people simply because of how hard it is to time such an event. Without any specific planning of either happening (the sun rising or setting), we stumbled upon both. Absolutely amazing.

Ok, that was my first day, and it was the longest by far as I was riding on I don’t even know how many straight hours of no sleep at this point. After that, we hit up In-N-Out (really good), and went straight to bed.

I will not go very detailed here on Day 2 because the highlight was obviously the trip to the live show which is going to take up it’s own post.  The biggest thing we did was take the car to the Warner Brothers tour, which was spectacular. Sitting in the audience of ‘2 Broke Girls’ as our guide described how the week is prepared got me more and more excited for what was going to happen that night (note: the studio was empty. I think ‘Mom‘ was shooting, and she also kept going on and on about ‘Fuller House’.

We went back to the hotel, got ready for the show, and you can read about that here….

Read about my experience as an audience member for the show

After the show, we met up with the other contest winners and went back to the Universal citywalk which looked incredible at night. We mostly did shopping, ate, and chatted. But, if they read this, they were both an absolute pleasure to be around and we had a fantastic time.

(oh, and we ran into someone from the show ‘Glee’ in Hot Topic. I don’t watch the show, but my wife got excited, so I approached her and simply asked if she could say hi to her. She obliged and even gave her a hug. This made for a very happy wife. (the actress was Dot-Marie Jones)

We left the hotel at 5:45am for a 7:30 flight, and like I mentioned above, this is why you leave early. After a long line at TSA with them losing my laptop for a bit, by the time we got to the Jetblue boarding area, we only had enough time to go to the bathroom, get some snacks and head on board. Much different than our Logan Airport experience.

Thank you for reading my adventure in LA.  Again, the Big Brother live taping will be next