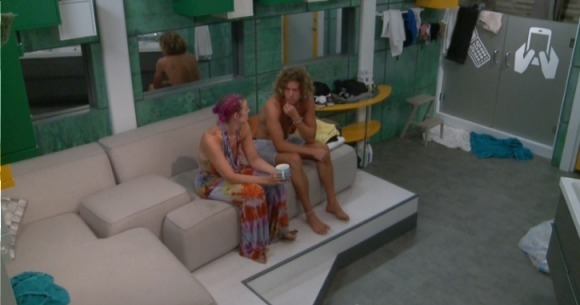 Tuesday Feed Updates – The Denial Is Strong In The Hive

It’s another day in the Big Brother house and it’s hard to say what today will bring. I’m guessing a whole lot of Rockstar and Haleigh sitting alone complaining how unfair the world is, but I could be wrong! Stranger things have happened, right?

I can’t quite put a finger on Rockstar right now. It’s very clear that she’s angry about being on the block and worried about going home, but at the same time, she is talking like she’s staying. I think I may be confusing confidence with wishful thinking because her actions speak much louder than her words. She’s been following around Sam like a puppy and continues to pull people aside to have one-on-ones. Don’t get me wrong, I’m not bashing her for that. It’s great that she’s playing and it’s another refreshing week of people fighting to stay in the house rather than roll over and die like previous seasons. I just think her fake confidence is going to be the downfall of her season because whenever she does campaign, she has a terrible approach.

Using the ability to know what we know regarding alliances and where people stand, it would be nearly impossible to break the level 6 alliance. They are strong and loyal and the only thing that will kill that will be when they need to start eating themselves. What Rock really has to focus on are the two swing votes of JC and Sam and stop being so overconfident that they’re in the bag. She needs to give them reasons to want level 6 broken up and not reasons why they should worry about whether or not her bills at home get paid. This isn’t a charity. It’s never been a charity. While everyone is empathetic to any financial struggles Rock may have, that’s not a reason to keep her.

Rock really needs to focus her attack on the future of the season for JC and Sam. Rock, Haleigh, Bayleigh, and Fessy couldn’t break them, so JC and Sam are certainly not going to on their own. Rock’s side of the house is much easier to attack in the future and a much more realistic side of making it to the finals if you’re a swing vote. Tyler is insanely hard to beat in competitions (especially PoV style) and as the house gets smaller, chances of him playing every week increase. He’s obviously safe this week, but evicting Rockstar is a key number to lose with only 9 people remaining in the house as of Thursday. All l6 has to do is win HoH and they are guaranteed numbers in their favor every week from here on out.

This is a crucial point in the season but whining about being a mom or having bills to pay is not going to keep you in the house.

Before I forget, the sisters from BBOTT (Alex and Morgan) started a blog if you want to check it out. They recently went to a live taping of the show and it’s a good read.

Really dead night tonight. Angela told a super long story about how she got into pole vaulting and that was about it. Recap in the morning if Mel can find anything to write about!