Update Inside The House Heading Into Tonight 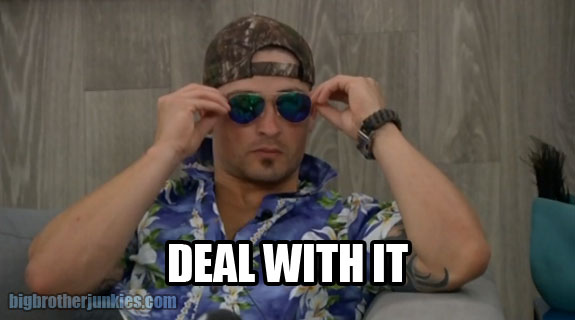 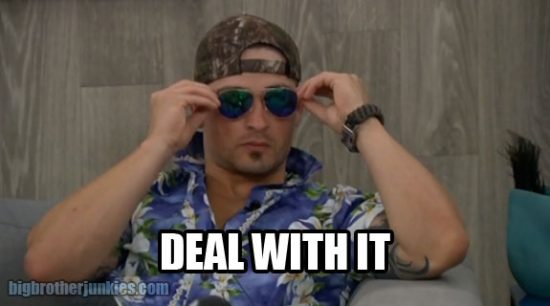 Good afternoon, everyone!   I’m still on vacation, so I can’t update the header to give you spoilers there (I really should put my FTP program on laptop at some point), but fear not. I have them and they’re good.

The path to a BB12 repeat took a sharp turn recently when the group decided to vote out their version of Brittany (Christine) earlier than expected.  Instead of using Christine, they were set to take Victoria to the final 5 and then cut her loose for a big battle of 4 strong players.

All of that changed when Derrick slowly realized he would have been going into a gun fight with a pellet gun. Don’t get me wrong, Derrick has won his share of competitions, but if he really wants to win $550k (+50k for being TA), he had to cut away some of his competition before the gun fight began.

The reset button gave Derrick that opportunity when Frankie went from having all the power to absolutely no power and sitting on the block.  It was time to make the move and Derrick & Cody knew it.  They may not get an easier shot at removing him from the game when it came down to the final 4, so they made the smart move and cut him (and his many competition wins) from the equation.

Derrick then went on to win the before/after HoH competition, and that is where the episode ended.  Here is what happened since…

Caleb instantly became the next target, and that was made clear by nominating him against Victoria.  Caleb can still stay in the game, but that rests in the hands of Cody – who won the PoV.  Cody does not have the same loyalty to Victoria that Derrick has, but he also isn’t stupid.  If Cody keeps Caleb in the game, the final HoH competition will be brutal.  The first round is likely the endurance competition (which should air on Friday), and if I had to go against Victoria or Caleb, I’d choose Victoria.

By going against loyalty, Cody will have a harder time winning the grand prize if he’s in the final 2, but if he remains loyal, there is a solid chance he won’t make it to the final 2.

The veto meeting should happen live tonight, but I don’t expect him to use it.  It’s a $50,000 gamble that I don’t think he’ll be making.  The big question will be who Derrick would take to the final 2 should he win the next HoH.

I will try my hardest to live blog the show again tonight. It starts at 8pm est, so only 3.5 hours away.  Do you think Cody will use the PoV and have an all-guy final 3, or take the path of least resistance?