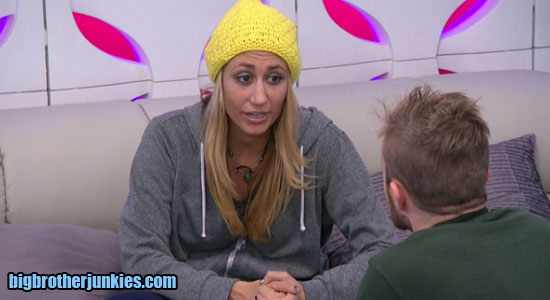 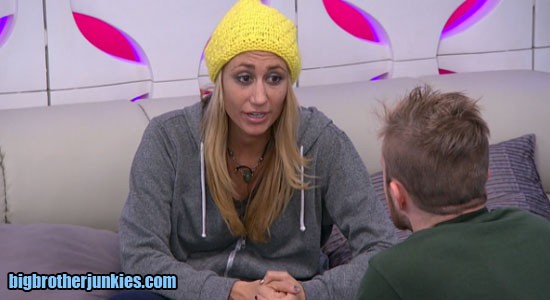 First, let me say there will be no live updates today or tomorrow. Feeds are down today (starting at 12pm est) and won’t resume until 12am est tomorrow night (after the west coasters get their show). This is a yearly event and it is because the eviction is actually happening today, but it won’t air until tomorrow. In order to maintain ratings, they can’t let out the spoilers of the episode.  Now, why don’t they just do a live eviction on Tuesday? Well, a few reasons.  First is production time and costs. By doing it Monday, this gives them plenty of time to break down and build a new HoH set for Wednesday night. Second is the cost of running a live episode versus a taped one. While I am no expert in TV production, I can assume it does cost a lot more to air a live television show because it’s a ton more work.

Anyway, back to the game. Last night, Vanessa called John up to the HoH room and declared they needed to make a big move. Something that is game changing and will have people talking. That move is to do the move everyone and their mother is expecting, which is to split up the showmance.

Seriously, that premise could not be any more Vanessa if it threw on a beanie, some sunglasses and sat there with a straight face spacing out.

I don’t mean to bust on Vanessa here, but getting rid of Austin is really one of the few good moves she could make this week.  Only Vanessa can take such an obvious move and hype it up into something so grandiose. Her other options are Liz (weaker of the showmance couple) or Steve (the guy who isn’t swapping spit with anyone else in the house). So, well done Vanessa. Pat yourself on the back for making such a ‘big move’.

Does this guarantee that Austin is going home?  No, but it’s very likely.  Vanessa has been bouncing around the idea of sending each person home (as the only person she’s powerless to save is Steve IF John votes with Liz). For awhile, Steve thought he was screwed, especially when John would not give him a straight answer on votes.  In fact, when Steve asked John straight up if he had his vote, he said to ask Vanessa because John is really trying to shake the ‘bromance’ thing he has going with Steve.

I will put up a power ranking later on, but I think you already know who will be at the top. The biggest decision I’ll have to make is who to put second… John or Steve.