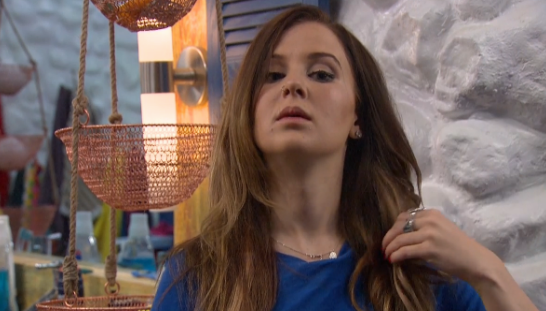 Michelle is staring into your soul

Waiting On Veto So Here Is A Recap Of The Week

Quick note – In Big Brother land, the ‘Week’ begins the second someone is evicted. So, if you see anyone here reference a week, it is likely from Thur night until whatever day of the post.

With the messiah off looking to get resurrected, re-enter the house, and re-name that day Easter Part 2, there is still a game going on, and that game is which newbie is next on the chopping block. Big Brother ended Thursday night on a Walking Dead style cliffhanger, so if you’re looking for spoilers, you’re in the right place. Team James was cruising toward their second straight HoH comp win (if you remember, they won the comp that sent Glenn home), but James started throwing the comp and slowing down when he noticed his team was ahead. The plan was to get Victor out all along, and they couldn’t do that if the team had safety. The only problem is that his team noticed his sudden slowdown and even Bronte began begging him not to throw the comp.

In the end, Paulie went from doghouse to penthouse when his team won the competition and they chose him to be the HoH for the week. Of course we all know he’s just a puppet HoH and the real power is in the hands of the vets, but Paulie can feel happy knowing he is at least safe for the week and enjoy his little bit of power.

The plan for getting Victor out was going to be a backdoor plan, so Paulie went and nominated Paul and Bronte as the first 2 nominees. If you’re new to the strategy, it is to decrease the odds Vic can play in the power of veto and win safety. The vets actually informed the ‘spy girls’ of that, and they got on board with the plan, so Bronte hasn’t been running around like a crazy person. There was only one more step in the way, and that is the Road Kill competition. To keep the plan smooth, anyone but Vic had to win – but Murphy’s Law kicked in and you can guess who won that competition.

Winning RK doesn’t guarantee safety, but it does put the house in a tricky situation. Victor’s nominee is not only playing for their own safety, but unknowingly playing for his as well. The reason being, should Victor’s nominee win, Victor and only Victor will be the one to choose the replacement nominee (and he’s obviously not going to choose himself). Seeing as Victor is (so far) unaware of the backdoor plan, he didn’t realize he should put up a strong player. Vic was going to go with James (out of spite, not strategy), but then changed it up at the last minute and realized nominating James would basically expose himself as the Road Kill winner. Unbeknownst to him, the whole house knows he won the competition because he ran and told Paulie right after he won it. Still in the dark, Victor nominated Tiffany as the 3rd nom, and she now has to throw the competition. Or, win and use the power of veto on someone else on the block (her suggestion, not mine).

To summarize… Operation remove Victor was going smoothly until he won Road Kill. Victor living in Victorland doesn’t realize the entire house not only wants him out, but found out about his victory. Instead of going with someone strong who can possibly win the veto competition and keep him safe for the week, he chose a seemingly random person in Tiffany. Little does he also know, he almost stumbled into a smart decision by nominating James out of spite, but that would have backfired on him anyway because James wasn’t scared to throw the competition.
(I say smart because under normal circumstances, James is a fiery and experienced competitor who would have a good chance to win the veto if he tried.. but Victor doesn’t realize that anyway)

There you have it. Victor has stumbled into winning the RK, stumbled into nominating someone who could ‘accidentally’ win (because she is now paranoid and thinks they’re after her), and may stumble on his name being drawn for one of the 2 slots to play in the veto competition today.

Also, if you’re wondering, Da’Vonne, Zakiyah and Paul were picked for have-not because they had the fewest berries in the competition. I’m not sure why those who fell (Natalie) were not selected.

Veto competition is today, and we will have a much better idea on the rest of the week when we see who is wearing the golden veto around their neck when the feeds return sometime later in the day.