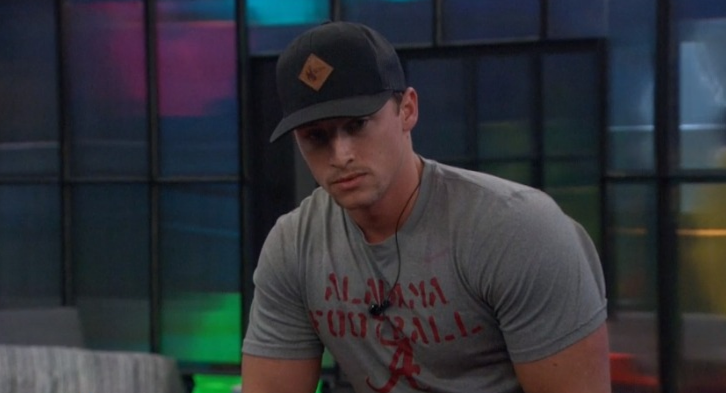 Good morning, Thursday is here and one of the bros will be leaving. Despite DR’s made to look like Sam is still undecided about using her power to save one, she isn’t. Sam has plenty of other stuff to deal with this week which I’ll get to later. Here’s my thoughts on last night’s episode before I recap what happened yesterday in the house.

Here’s what happened on the feeds yesterday:

CBS has confirmed the hoh comp will be endurance and be shown on the live feeds. Vegas said it’s going to be the wall comp.

The new women’s alliance is called Maneaters and I’ll just say, it’s stupid. I know a certain percentage of viewers hope for an all-female alliance every year. First, I’m not sure why and second, this isn’t the group to get it done. When I heard about this yesterday, I was planning on asking readers to do a 2 day- over/under guess on how long before someone told but that was blown before this mornings post. Maybe later in the season and maybe with only RS, Hayleigh, Bayleigh and Rachel it could have worked. Rachel gets along with women on the other side (except Hayleigh and Hayleigh is the one with the issue) There are soooo many reasons this won’t work! The women don’t like each other and have very different game priorities. It’s also too many people. The women in the house have the same thoughts on Kaitlyn as we do so why in the hell do they think she’d EVER be in a group with only women? To her credit, Kaycee and Bayleigh have told and Kaitlyn hasn’t but it’s only because she thinks Bretts leaving and she’s been upset with Tyler. Give it a day…

Kaycee is being labeled a rat on different sites for telling Tyler about maneaters. She has an alliance and Tyler is her closest person so why wouldn’t she tell him? I agree with Rachel about keeping it quiet in case they need it later because she kind of hangs out with the other side but Kaycee doesn’t.  Kaycee knows Tyler isn’t going to blow it up if she tells him. He encouraged her to keep up the act. Foutte never talked to her (they admit it themselves) so why would she trust them with this? She also knows what a big mouth Kaitlyn has so it’s smarter to tell Tyler herself before Kaitlyn does.

The comparison I mentioned this year to BBCAN was about the women they cast. Even though the same people cast for both, the shows are cast very differently. US casts more model wannabe types who are looking for love. Canada casts more unique personalities and strong women who want to play the game. (There are exceptions and Canada loves a shomance too) I don’t care about a women’s alliance but I do care about strong minded women who are there to play. Hayleigh is flirting but the prize is her focus. Bayleigh got in a shomance but went right into game mode when Swaggy left. All of the women have winning on their mind except Kaitlyn and shes probably got a hit telling her she’s going to win anyway. They may play badly but they want to win and don’t care which guys they step on to do it. That’s why it reminds me of BBCAN.

After tonight, they’ll have 2 slots left for pre jury evictions if it’s a 9 person jury. (I like the 7 person jury myself) This isn’t what I want to see happen but the hg’s as a whole would be smart to fill those 2 slots with Sam and Kaitlyn. NO ONE in that house should trust either on the jury. I don’t see any rational reasoning for who they’d vote for in any situation.