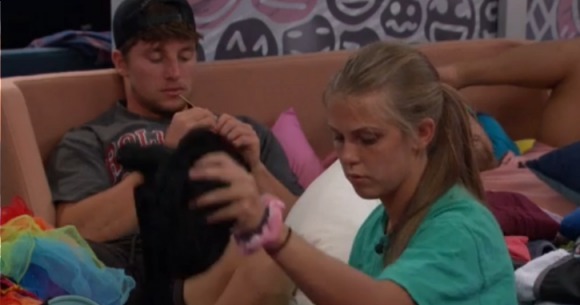 When I listen to these people re-tell the competitions, I sometimes wonder if they’re exaggerating just how bad things were. Haleigh talked about how embarrassed she was about her screaming over Rock’s potential win (only to have her lose). Rock obviously talked about how she handed Tyler the comp and how she hinted at staying safe because of it.  I was pretty surprised to see that’s exactly what did happen, and if anything, they undersold it when talking about it.

Rockstar had not one, but two major blunders during the veto competition which will haunt her forever. Her blunder with picking the wrong answer was obvious, but giving Tyler the answer was brutal. Absolutely brutal. Like, you basically just need to pack up and go home after that. There is no coming back from it. In ten years from now, Rockstar’s veto performance will be in top 10 lists of biggest reality show blunders of all time (possibly right near Kaitlyn’s failure to put together a puzzle made for a 3 year old).

Sure, it’s likely that Rock wouldn’t have survived another 2-3 weeks in the house and this just gives her a longer vacation, but you never know. This also could have been the last week she sat on the block and ended up coasting to the final 2 like a Victoria. She may have even won if she had enough bitter jury members at whoever sat next to her. I sure as shit didn’t think Josh would win last season, so anything is really possible.

On the bright side, nobody will remember how Rockstar did bad math during her tiebreaker with Angela.  That’s probably because even had she multiplied properly, Angela still would have won. This, however, was literally the difference between staying and going this week. Ouch

Also, the talk made me forget my ridiculous suggestion earlier today that Brett should actually work with RS and vote to keep her. Granted the entire plan hinged on level 6 never actually finding out that Brett voted that way so it’s not like he was flipping sides, but when RS told Haleigh about Brett’s joking suggestion about that possibility, I knew she was just not to be trusted on issues like that. Level 6 would certainly find out because Rock is just bad at this game.